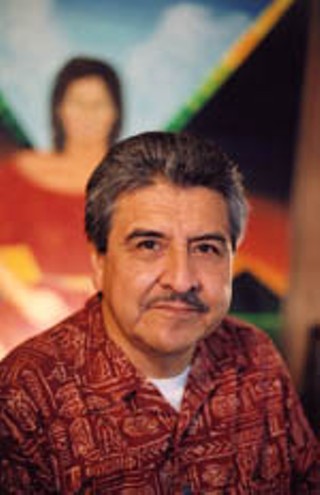 When Sam Coronado paid a visit to Self-Help Graphics in Los Angeles in 1990, it was a life-changing experience. The Austin-based artist, who had focused on painting up to that time, discovered printmaking and was inspired to direct his energies toward that form. It was a change that rippled through the Austin visual arts scene, because Coronado also wanted to give other artists the opportunity to make prints and to give them the studio space, materials, and guidance to do so. He launched the Serie Project in 1993, and in the dozen years since, more than 150 artists from across from the United States and Latin America have taken part in the program at no charge. They work through the artist's studio, one of only three Latino-based print studios in the country. Coronado's contributions to the arts community extend far beyond this project, however. He and Sylvia Orozco and Pio Pulido were the three artists who founded Mexic-Arte Museum, and he has long been a respected educator, teaching design and painting at Austin Community College, Laguna Gloria Art School, and the Dougherty Art Center. His artwork has appeared in group exhibitions throughout the U.S., Mexico, and Europe.