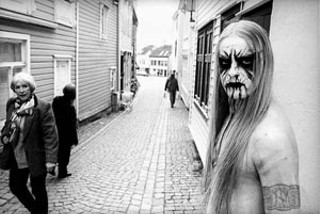 This week offers a rare chance to objectify pure evil here in Austin. In conjunction with Alamo Drafthouse Cinema's screening of the documentary Metal Storm: The Scandinavian Black Metal Wars on May 9, photographic portraits of satanists taken by former Austin resident Peter Beste will be on display at the Space on Airport Boulevard. This series of photos shows various Norwegians doing a darn good job of looking scary. Most have long hair, spiky bracelets, and lots of heavy-metal man jewelry. The look of choice is like Kiss make-up after they've sweated through it. Squinting eyes glare out of black eye sockets that drip down, while red drips below the mouth and nose. Alice Cooper looks like a golfing wimp next to these guys. Is it Halloween? Hell no. Apparently satanists are busy worshipping the devil right now. Beste interviews his surly subjects and asks them how they came to worship the devil.

One chap, Frost of Satyricon, recalled visiting a store in Oslo called "Euronymous" or Hell, and let's just say he felt at home there. On actually becoming a satanist, Frost of Satyricon says, "I had never really understood anything before, but this was my path – my kind of style," and then, "It could be that kick in the back that pushes you into realizing a bigger potential." So the dark church pushed him to dig deeper in life, that's cool. Not cool was the violent rash of 22 church burnings that coincided with rises in the general movement. Beste's Web site says that "in the early 1990s, these self-proclaimed satanists burned 14th-century wooden churches, desecrated graveyards, and incited blood feuds as part of their campaign to rid Norway of Christianity and revert to ancient Viking customs." Doesn't sound much like a "take a liking to a Viking" Rotary club but more like a very marginalized group of men, some of whom are in heavy metal bands. Beste will be present for the exhibition's opening on Saturday, May 7, 7pm-midnight, at the Space. A book of his Norwegian black metal photographs will be released this year in Japan.

"Norwegian Black Metal – Photographs" by Peter Beste is on display May 7-21 at the Space, 4803 Airport. For more information, visit www.peterbeste.com.