Even for a Tuna virgin, 'Red, White and Tuna' is a viciously funny excursion into small-town Texas politics, relationships, and heated gossip 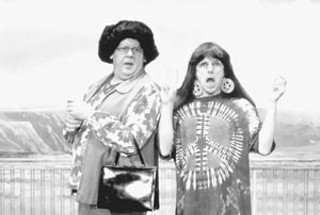 Paramount Theatre, through May 1

Never too early for patriotism, Red, White and Tuna is a viciously funny excursion into small-town Texas politics, relationships, and heated gossip. Portraying matronly ladies, cowboy disc jockeys, hippies, and a dozen other memorable characters in the burg of Tuna, Texas, the show's writer-performers Jaston Williams and Joe Sears glide into vocal varieties and signature body postures with technical expertise guaranteed after 22 years of practice and collaboration.

In this third edition of the Greater Tuna series, an impending high school reunion brings out the best – and more often the worst – in the citizens of Tuna. Who will be crowned the reunion queen? Nasty spitfire talk among the competitors, whose extravagant opinions are based on rumor and suspicion, stirs up comedic moments that get you chuckling before you realize what's happened. Lines steeped in sardonic syrup pour out of characters' mouths. Through subterraneous comments on simpleminded religious orthodoxy and community pressure, Red, White and Tuna exposes the indiscernible snare of infectious social obligations and appearances.

Hesitantly, I admit to being a Tuna virgin despite being an Austinite who has seen characters from the show in local advertising and heard all the praise over the years. The loyal fan base is not without cause; these guys can act, pantomime, write, and switch into costumes seemingly without effort. And even though I was a newcomer to this local theatre phenomenon, I had little difficulty recognizing character connections and motives. Often, I was impressed by how far the Tuna guys would push the narrative.

Sears starts off with frumpy grandmother/Aunt Pearl Burras wearing a Styrofoam Statue of Liberty crown, unflinching and completely secure in "her" self as she prepares for the fire-cracking chaos of the Fourth of July picnic. Other distinctive highlights include a car crash fiasco with Pearl and Vera Carp; premarital strife and reconciliation between Bertha Bumiller and DJ Arles Struvie; local artisan Stanley Bumiller's dramatic repulsion listening to his menopausal mother's philosophy on sex; local homosexual Joe Bob Lipsey causing a ruckus as the coronated reunion queen; and a UFO landing-ramp flashing and fogging up the set as Didi Snaveley's estranged husband returns nonchalantly from his alien abduction.

As a desert town too small to notice, the infinitesimal is what makes Tuna special. No story or person is worthless. Even with all their racism – such as Vera's ignorance of her house cleaner's name, designating her and all previous maids as "Loop-ee," or Didi's obsessive firearms fetish or Petey Fisk's ill-informed animal rights proclamations – every personality has a charismatic history we are enticed to imagine through the portrayal. I may not like Vera if I were to meet her, but watching her rant and rave about Methodists or "making shade" in the desert heat, I am stung with a not-so-foreign feeling. Amidst the bigotry and illusion, Williams and Sears manage to humanize vapid conservatism through drag performance. It's quite a feat, and it's fascinating to see so many fans repeatedly return to the Tuna world when the underlying story provocatively blends righteous belief with a satirical slant.