Get Your Rees On

Comic Artist David Rees and the theatre of "War" 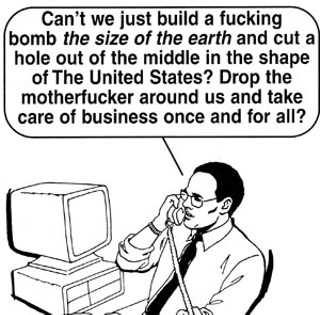 David Rees' Get Your War On

Rude Mechanicals, the innovative theatre troupe who brought us stage versions of Greil Marcus' Lipstick Traces and James Kelman's How Late It Was, How Late, now turn their considerable adapting powers to Get Your War On, David Rees' riotous clip-art comic about the War on Terror®. The Chronicle recently spoke with Rees about the project

Austin Chronicle: Is this the first time Get Your War On has been turned into a stage production?

David Rees: Yeah, this is the first time. To tell you the truth, I went a couple years turning down a lot of people who had ideas to produce GYWO for the stage or the screen or whatever. Because I thought it worked really well as a comic, and I wasn't sure, I thought that having actors saying all the lines would make it too literal. People have responded to the comic because the artwork was boring, visually static, but, when you read it, there was a lot of energy in the language. And I was afraid that if you had people gesticulating and just screaming out the lines, you'd kind of lose that.

AC: But the Rudes convinced you it was a good idea?

DR: A lot of people e-mailed me only because the comic got a fair amount of media attention and had a lot of bad language in it. I felt that a lot of them didn't understand what I thought was important about the comic, but when these guys pitched it to me, they seemed really smart and able to look beyond the language, to respond to the message underneath the comic. And I was excited, because at that point I figured, you know, why not try new things and have fun? And they seemed really together, and I asked a friend of mine who's involved in the theatre world and he was like, "Oh yeah, the Rude Mechs are great."

AC: So how'd they get in touch with you?

DR: I met with them really briefly when I was at the Texas Book Festival, right before the presidential election last year. I went out and had a quick drink with them. I wish I'd been able to spend more time with them ... I have no idea what the show's going to look like or sound like or anything like that. But that's fine with me. I decided at some point that, if they were going to do it, they should just do it, with little to no input from myself. Because they're using the text and the comic as a kind of jumping-off point for their own kind of project, their own interpretation. So I'm leaving it up to them and just focusing on the strip as I make it.

AC: Are you going to be in town for the premiere, or at least one of the performances?

DR: That would be fun, but I don't know if my budget is gonna allow me to do that.

AC: Do you think that, if this is successful, would that open you up to a movie or video version?

DR: I don't know ... I would have think about it. If I thought the Rude Mechs did an awesome job, I guess I would have them do it. But I don't know. I'm really bad about thinking about how to exploit the popularity of it. My biggest fear is that I'll be trying to ride this horse long after its legs have fallen off. To try to make a movie or a TV show out of it now, it'd be kind of like, "Oh yeah – I remember this: that thing from the fall of 2001." Like, "Why are they now making this crappy TV version ... ?" You know what I mean? I'm really self-conscious about pushing things past their expiration date. I'd be open to it, though. As long as I felt that the people who would be involved in the project were involved in it for the right reasons. I really had, in 2001, a whole lot of offers from people who wanted to, like, jump on the bandwagon and capitalize on the buzz. Unfortunately for them, the buzz has long since faded, so I don't get those offers anymore. So maybe, yeah, if somebody approached me now, they'd be doing it because they like the material, not because it's being covered by all the magazines.

AC: If I'd seen another strip like this, all the clip art, and it wasn't working so well, I'd think, "Okay, this guy is just taking a shortcut – because the fucker can't draw."

AC: But your use of clip art is one of the reasons why it works so well. So I'm just asking out of curiosity: Do you draw decently? Are you a good artist?

DR: Yeah, I used to draw comics. I used to draw them for my college student paper, and in seventh grade, too. But I usually felt drawing comics was boring and time consuming and wasn't really what I was interested in – which was always more about the language than the visuals. So when I started using clip art, it was a lot more efficient, a lot easier to tell a joke. And then, after I'd decided to go that route, I decided to make the comic visually interesting using clip art. The best example of that is the comic I did called My New Fighting Technique Is Unstoppable, where the story is kind of driven by these crazy clip art pictures I found. In Get Your War On, I wanted the art to be as boring as possible, because what I imagined was a real comic that could be on the newspaper page alongside Rex Morgan, MD, and Mary Worth.

DR: You know when you're a kid and you read those comics and nothing ... ever ... happens? So I thought it would be cool to make a comic that looked like that, but when you read it, you'd be like, "Holy smoke, you guys are really talking about startling stuff." So, for me, the art isn't that important. But it wasn't totally thoughtless; there's some logic behind it. I'm glad you picked up on that. A lot of comic aficionados dismiss it out of hand, like, "Oh, that's not a comic, you didn't draw it, why should I waste my time reading this?"

AC: Oh, sure, and somebody else can draw a lot of comics, of a lot of people walking around, assuming different positions or whatever. Somebody can take 20 million years to figure out how to draw a person in three-quarters view, bending over a stapler ... but who gives a damn if that's all they're doing.

DR: Oh yeah, totally! I mean, that's the other thing, I hate any kind of inefficiency and waste. I hate it in the government, and I hate it in the cartoon world. When someone spends hours and hours rendering comics, and then there's no energy, there's no ideas, there's no humor, and I get nothing out of it? I mean, what was the point of that? It's like pushing a rock up a hill.

AC: So what comics do you enjoy reading, which cartoonists do you admire?

DR: Well, there's a guy who's a professional acquaintance of mine, Tom Tomorrow. I think overall, in terms of consistency, and just week-in week-out putting out a solid, recognizable comic, he's probably one of the best cartoonists in America. I've always admired these guys who kind of just do it. It was a real struggle for me when I decided to get on a regular schedule – the comic runs every other week in Rolling Stone, and in a handful of alternative newspapers – and it's a struggle for me to hold myself to that schedule. I'm always impressed by guys who are able to just bang 'em out. And that sounds disparaging, but I mean people who produce work every week that's solid.

AC: Well, that's what's so great about your stuff: It hasn't gotten old, it's not like just some gimmick you have.

DR: Well, thank you. I'm relieved to hear that, because I'm always afraid I've officially worn out my welcome, that's it's become an embarrassment. Every week I'm surprised that Rolling Stone continues to run the strip. I work at it, but for me the work is not like sitting down at my drawing table and coming up with awesome new poses that I can put my characters in. I'm just taking in information and trying to figure out the best way to express my frustration with American foreign policy or national affairs. If it doesn't feel old, I guess it's just because I still force myself to look at the newspaper every day.

AC: It's like what you said about if people are interested in doing a movie version now: They're gonna be caring more about the work and not just because it's got the buzz. Other people who were like, "Huh-huh, it's clip art, and they use bad language!" I would imagine that, by now, those people are over that and they're on to the next thing.

DR: Yeah, totally. I don't know what Internet phenomenon they're all e-mailing now, but I hope he makes a lot of money, whoever he is.

AC: But, no, your stuff has staying power, because the world is always gonna be fucked up – and you express the feeling of frustration with that so eloquently.

DR: Well, my whole plan was, I was going to quit if Kerry won the election. I had a deal worked out with my editor at Rolling Stone, I was going to drop Get Your War On and do something else, just leave the strip once Bush left office. Then I got my mandate from the people. And thank God for that.

The stage version of Get Your War On runs April 28-May 14, Thursday-Sunday, 8pm, at The Off Center, 2211-A Hidalgo. For more information, call 476-RUDE or visit www.rudemechs.com.