With Patrick MacDonald's dark comedy 'Pageant,' Hyde Park Theatre takes us deep into the woods to consider the nature of beauty with a quartet of low-key comic Canucks 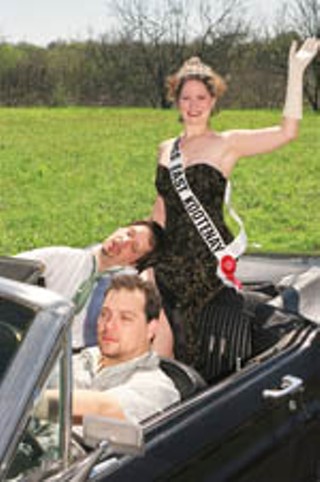 No matter how many times we hear that old saw about "the eye of the beholder," it just doesn't seem to sink in. Maybe that's because it tends to get drowned out by the constant barrage of Extreme Makeovers, People lists of the most gorgeous celebs, and competitions crowning this or that miss, mister, or moppet as an exemplar of some physical ideal, all of them selling us on the notion that there is in fact some Universal Standard of Beauty. The omnipresent pressure on you and me to buy into this concept of physical perfection is enough to turn a T. rex into a puddle of fossil fuel. Imagine what it must be like on a young woman whose life has been consumed with pageants, none of which she has ever lost. Her whole identity is bound up in her looks, and if she should doubt whether her natural appearance were sufficient to win her that next title, well, she might do something drastic, might seek out a scalpel-wielding specialist who could ... improve her.

So it went with Trudy, the recently crowned Miss East Kootenay and winner of just about every other beauty contest between Calgary and Kamloops. Only it didn't go so well with the surgeon, whose reach, shall we say, exceeded his grasp. As Daniel Macdonald's dark comedy Pageant opens, the doc is paying the price for his surgical sins at the hands of Trudy's thuggish boyfriend and alcoholic dad, a couple of car customizers in Trudy's hometown. They discuss the finer points of automotive color schemes even as they prepare the doctor for a long dirt nap. But their plan to even the score takes some unexpected turns, not the least of which is Trudy getting her own sweet revenge. And what of Trudy? What becomes of her if she's no longer considered beautiful by her boyfriend or the town that raised her to be a beauty queen? Is she just like a Camaro that's been painted green? But, wait, isn't there someone who finds green Camaros beautiful?

Macdonald plays this all out in the deep woods of British Columbia, which are realized with surprising effectiveness in the intimate confines of Hyde Park Theatre. For this HPT production, set designer Ann Marie Gordon provides a sloping forest floor and thick tree trunks that, in the cool blue moonlight cast by designer Don Day's lights, suggest ancient sentinels observing a bunch of us poor, frantic humans strutting and fretting over our fleeting beauty. (Those forests and mountains could teach us all a thing or two about true beauty.) The naturalism of the setting grounds this Canadian import, keeping it from sailing off into sheer absurdity. The same could be said for the performances, which director Ken Webster keeps a tight rein on. They're purposefully low-key, allowing the comedy to bubble up from the characters and situations instead of being oversold with schtick. Corey Gagne's sturdy, stolid Bud, with a deadpan worthy of Buster Keaton, keeps pulling flask after flask of hooch out of his pockets, slyly showing us the taste for liquor that lost him custody of Trudy years before and getting a laugh every time. He and Jude Hickey play the back-and-forth exchanges between Bud and fellow grease monkey Fenster like a north-of-the-border Abbott and Costello, comically at odds but oddly mellow. Robert Matney's Randy is likewise subdued, a mild-mannered Dr. Frankenstein who realizes when he's made one nip and tuck too many. They all circle around Kelsey Kling's Trudy and understandably so; she radiates a wholly uncomplicated allure, a wholesome, homespun charm rooted in the confidence she has in her own beauty. Her sunny, perky demeanor is irresistible, and even when she shows up post-op, her features almost entirely hidden behind a mask of tightly wrapped bandages, Kling continues to beam Trudy's Canadian sunshine: from her eyes, in the flick of her wrist, in the wiggle of her walk. It's a canny turn, with Kling proving herself a truly physical comic actor.

Ultimately, Pageant may not tell you anything you haven't already heard – "eye of the beholder," yadda yadda yadda – but it lets you hear it in the woods of British Columbia, without all the usual distractions, where it just might sink in.