Boyd Vance, founder and director of Pro Arts Collective, acclaimed musical theatre performer, and leader in nurturing and promoting African-American arts for a quarter of a century, has died 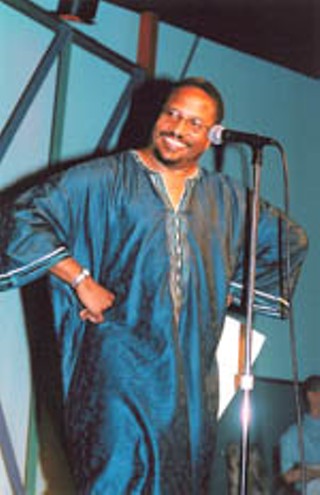 A true theatrical dynamo and an artist who led the way in nurturing and promoting African-American arts for a quarter of a century has died. Boyd Vance, founder and director of Pro Arts Collective and one of Austin's most acclaimed musical theatre performers, passed away Saturday, April 9, from an aortal aneurysm following heart surgery. He was 47. A Houstonian by birth, Vance came to Austin in 1973 to attend high school at St. Stephen's Episcopal. Five years later, he made an auspicious debut on the Paramount Theatre stage in the Afro-American Players' production of Purlie, and from that moment on, he was in the thick of Austin's arts scene, acting, singing, directing, producing, working for arts organizations, and starting his own. His showman's style and irrepressible humor made him a natural for Esther's Follies, where he spent more than two years, and in parts as varied as the emcee in Cabaret, Snoopy in You're a Good Man, Charlie Brown, Puck in A Midsummer Night's Dream, and Tony the hairdresser in Shear Madness, the last a role Vance made his own during a historic two-year run at Zachary Scott Theatre and that in turn made Vance a genuine Austin star. He made his mark in dramas, too; and in children's theatre, as an early member of Zach's professional company, Project InterAct; as a singer, fronting the bands Cool Breeze and 45RPM in the Eighties and Nineties; and even in ballet, as the centerpiece of Boyd and Blue, a 1990 dance choreographed by Lambros Lambrou for Ballet Austin.

Vance made the leap to directing in 1984, with a production of To Be Young, Gifted and Black at Huston-Tillotson College, a debut that led Michel Jaroschy at Capitol City Playhouse to invite Vance to stage the Fats Waller revue Ain't Misbehavin' there. After that proved a popular and critical success, Vance was directing as much as acting, not just musicals such as Eubie!, The Wiz, and, yes, Purlie, but dramas, too, giving Austin its first taste of August Wilson with Ma Rainey's Black Bottom and its first A Streetcar Named Desire with African-American actors in the lead roles. Through directing, Vance made one of his most valuable and lasting contributions to Austin's arts scene: giving fledgling performers their turn in the spotlight and nurturing them into strong, seasoned artists. It remained true through his most recent shows: Topdog/Underdog, Black Nativity, and Twilight: Los Angeles, 1992.

Never one to slow down after the curtain fell, Vance channeled the seemingly inexhaustible energy that fueled his stage work into community service, working on the boards of ACTV and the Austin Circle of Theaters (for which he was twice board president), aiding the Central East Austin Community Organization and Informe SIDA with HIV youth education, and founding groups to support African-American arts. One of these, Pro Arts Collective, is now in its 12th season of sponsoring and producing art exhibits, theatre productions, educational programs, and the African American Festival of Dance, marking its first decade this summer. Vance has long been recognized for his performances – with numerous B. Iden Payne Awards and two Best of Austin citations ("Best Theatrical Whirlwind," Critics Poll, 1993; "Best Stage Actor," Readers Poll, 1994) – but last year found him honored for all his good works: with ACoT's highest honor, the Special Recognition Award for outstanding contributions to local theatre, and induction by the Austin Critics Table into the Austin Arts Hall of Fame.

On Michel Jaroschy's death, Vance said, "In this fast-moving world, sometimes we forget who has been there all the time. I can remember few individuals who have been as significant and instrumental in the history of the African-American in Austin theatre as Michel. He took chances, took risks, and won and lost. Michel taught me how to rule with conviction, commitment, and honor, which had everything to do with having the guts, knowledge, and imagination to create art and never stop believing in people." Replace the name Michel with Boyd, and those words are no less true. Vance is survived by his mother, Hattie, his brother Clen and his twin brother, Booker. He will be buried in Houston this weekend. A memorial service in Austin is set for Saturday, April 23, 2pm, at St. James Episcopal Church, 3701 E. Martin Luther King Jr. Blvd.