The art exhibit 'About a Girl' is about music, really, with three young men behind it basing their artwork on a song 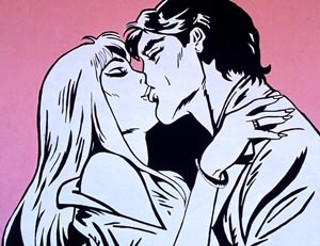 Debbie Does What Debbie Wants 3, by Hector Hernández

Never mind the title. This art exhibit is about music, really – and because the music these three young men have selected happens to be about the female of the species, the artwork naturally follows suit. Each of the pieces in this one-night-only show is based to one degree or another on a song, with the exhibit title taken from the Nirvana tune of the same name. Furthermore, the wall-based works share an interest in graphic styles that refer to comic illustration. The Empty-Handed Painter, by Andrés Vera

Matthew Rodriguez has a set of 12 small panels, displayed in a grid, that are based on "The Girl From Ipanema," with letters from the song's text incorporated as quirky little characters. The artist actively encourages viewers to "follow the bouncing ball" and sing along while viewing his goofy, charming piece, and you might just be tempted to do so. As with other works by Rodriguez, this conveys an affectionate view of childhood. Seeking cynicism and finding gentle wit instead, you start to get the feeling that he just really enjoyed being a kid.

Also playful but somewhat less innocent is Andrés Vera's series loosely based on "It's All Over Now, Baby Blue." Vera creates an imaginative narrative based on Bob Dylan's seminonsensical lyrics. The pieces are realized in a colorful, fairly polished, high-contrast illustrative style. A personification of id, the Baby Blue character is an uninhibited child who enjoys all she desires, even as she is the object of furious pursuit by the forces of guilt, shame, and punishment.

Least innocent of all is a series of seven acrylic paintings by Hector Hernández called "Debbie Does What Debbie Wants With Debbie's Sister's Fiancé." The title explains the content, though moral commentary is left to the viewer's imagination. These graphically punchy works, inspired by Chris Isaak's "Baby Did a Bad Bad Thing," are visually based on Mexican weekly comics (novelas semanales), and so bear more than a passing resemblance to cartoon-based works by pop artists such as Roy Lichtenstein. Colors in Hernández's series are limited to black and white and a cherubic, fleshy pink. 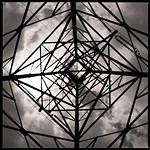