If it's Hyde Park, this must be a quirky Canadian comedy 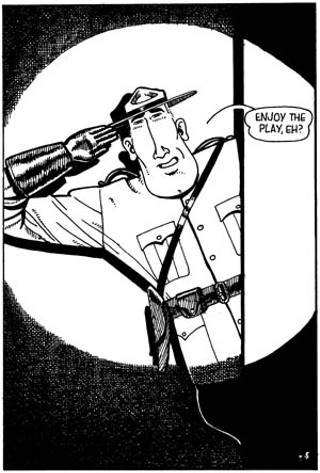 A playwriting renaissance of sorts is under way – north of the border, that is. Canada is burgeoning with theatrical exuberance, and while Toronto seems to be the center of the excitement, dramatists are bursting out of every province. And when the history of this playwriting explosion is examined, it parallels the one that's been written in our own theatrical back yard.

In the Sixties and Seventies, artistic directors at Canada's regional theatres tended to lean toward classical and commercial theatre, leaving native Canadians who wanted to present original work somewhat out in the Arctic cold. Like all aspiring artists faced with minimal support for their art, they formed new, independent companies that produced their own work in warehouses, garages, anywhere they could find a large and available space. Organizations such as Playwrights Union of Canada and the Guild of Canadian Playwrights were established, and a burgeoning nationalism fed into audience response.

A similar pattern can be seen in Austin over the past several years. Local writers such as Kirk Lynn, Dan Dietz, Kirk Smith, and Cyndi Williams can attribute much of their success outside Austin to the support they received from homegrown alternative theatre companies such as Rude Mechanicals, Salvage Vanguard Theater, Vortex Repertory Company, and Refraction Arts, three of which run their own warehouse spaces. Whether the playwright fostered the company or the company fostered the playwright, Austin's playwriting success sounds very much like Canada's, if on a smaller scale.

Given the common energy, it shouldn't be surprising that at least one Austin artistic director has become an aficionado of playwrights from the Great White North. "My interest in Canadian playwrights started in 1998, when Peck Phillips approached me about doing Daniel MacIvor's House," says Ken Webster of Hyde Park Theatre. "I loved it so much, I got curious about Canadian playwrights. Peck's our literary manager, and he reads a lot of plays, so he knew a lot of Canadian playwrights. When we were producing as Subterranean Theatre, we did MacIvor's The Soldier Dreams and John Mighton's Body and Soul. And since we transitioned from Frontera@Hyde Park to Hyde Park Theatre, we've restaged House and done Morris Panych's Vigil, MacIvor's Marion Bridge, and Michael Healey's The Drawer Boy.

"The thing these playwrights have in common is they're all pretty twisted and very, very funny, though they're all softies deep down. All their plays really have a soul and a heart. But the appeal for me isn't that they're from Canada; it's the quality of the plays. I like the same funny, quirky things in American plays. Melanie Marnich and Rebecca Gilman, two playwrights we've also produced, have a similar effect." During April Hyde Park is presenting a double-barreled shot of Canadian black comedy: Daniel Macdonald's Pageant (not to be confused with the recent cross-dressing musical satire at Arts on Real), about a beauty contest winner and a plastic surgeon, and Chris Earle's Radio: 30, about a hotshot voice talent who falters while recording a 30-second radio spot.

Sorry, but I just gotta say it: O Canada!