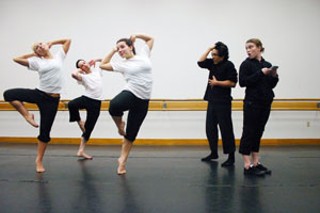 This year's New Works Festival runs eight days with performances beginning at 2pm each day and ending sometime around midnight. Works are being performed in a variety of spaces around the Winship Drama Building, 23rd and San Jacinto, some of them quite small and able to seat 15-50 people. The schedule has been organized with performances in the smaller venues starting on the hour and those in the larger venues starting 15 minutes after the hour, so audience members who are not able to get into a smaller venue have the chance to get to a larger venue and still see a show in that time slot.

Thanks to sponsorship of the University Co-op, all performances and events are free. For more information, visit www.coopnwf.org.

Camille goes to the grocery. She thinks this must be the best place in the world. Where life is just like the flickering images on the television.
Winship 1.172, Thursday, April 14, 7pm; Friday, April 15, 2pm

The tale of Apparition, Ky., a fictional Appalachian coal town whose inhabitants live trapped between a bitter past and a dying future.
B. Iden Payne Theatre, Monday, April 11, 9:15pm; Tuesday, April 12, 2:15pm

Dance Repertory Theatre: Cause and Effect

Three dances: Andee Scott's "born again," exploring the difference between what we say and what we do; a dance created collaboratively with Mexico's Delfos Contemporary Dance during a two-week UT residency; and David Justin's "Adverse Camber," a twisting journey from the urban to the rural, with a score by UT composer Rob Deemer.
Payne Theatre, Friday, April 8, 8pm; Saturday, April 9, 2pm and 8pm; Sunday, April 10, 2pm

Surreal comedy with songs in which Junebug tries to break out of a cycle of self-destruction after her grandmother's death. Drawings created live by artist Michael Arthur are projected during the reading.
Winship 2.180, Monday, April 11, 9pm; Tuesday, April 12, 9pm; Wednesday, April 13, 2pm

Fear of a Fuhrer

A man and a woman want to end their relationship, but their task is complicated by their mix of English, Italian, and a strange, unidentifiable language.
Winship 1.134, Friday, April 8, 9:30pm; Saturday, April 9, 7pm; Thursday, April 14, 7pm

Flesh and the Desert

by Carson Krietzer, with music by Kristi McGarity

The story of showbiz people, troupers, and the truth that lies somewhere between sequins and feathers and cooking a meal at home in 1950s Las Vegas.
Lab Theatre, Sunday, April 10, 7:15pm; Monday, April 11, 2:15pm

The tale of Coho, a young woman getting a full body tattoo, and her relationship with her tattoo master and the sideshow love affair between Geek Girl and the Pig Faced Woman.
Brockett Theatre, Saturday, April 9, 9:15pm; Sunday, April 10, 2:15pm

Through dreamlike vignettes inspired by the seven principles of Kwanzaa, a filmmaker making a movie about werewolves grieves for his murdered wife.
Winship 2.180, Thursday, April 14, 2pm and 9pm; Friday, April 15, 2pm

by Martha Lynn Coon, with music by Arles Estes

Film, live performance, and sound serve as vehicles for exploring and expressing the dynamic life of one man's mind and the choices he faces in a moment.
Lab Theatre, Friday, April 8, 9:30pm; Saturday, April 9, 9:15pm

With just a scrim, a few lights, and a chair, teams of students let their creativity run wild for five minutes in the trap room below the Brockett Theatre.
Brockett Theatre Trap Room, Monday, April 11, 2:15pm and 9:15pm; Tuesday, April 12, 9:15pm

Five women, all of whom represent some part of the character of Ophelia from Shakespeare's
Hamlet, explore the boundaries of love, existence, their bodies, and words.
Brockett Theatre, Sunday, April 10, 9:15pm; Monday, April 11, 7:15pm

A family's grown daughter begins to move backward through time, a signal that tragedy will befall the family within 24 hours.
Winship 1.134, Sunday, April 10, 2pm and 9pm; Monday, April 11, 9pm

by Ledia Carroll and Leah Davis

Interactive installation featuring a series of large-scale skins for people to move through will be set up for the duration of the festival.
Ongoing, Winship Bus Circle

by Shelley Hardin and Charlotte Craff

The Rich and Strange Cabaret

by Ryan Pavelchik, with film by Lucas Millard and music by Nano Whitman

Live performances by a CD alarm clock, a hotel room, a telephone, a television, and an actor tell the story of how a man who has shut himself up in a hotel room deals with his failures and fears.
Payne Theatre, Thursday, April 14, 7:15pm; Friday, April 15, 7:15pm

Thirtysomethings Frank and Helen are desperate to connect with other people, but they find themselves confronted by steel, glass, and concrete.
Payne Theatre, Wednesday, April 13, 2:15pm and 9:15pm

Guest artists Peggy Shaw and Lois Weaver join faculty member Jill Dolan and her class to explore the concept of queer performance. What is it? Does it require queer performers and queer spectators?
Winship 1.134, Monday, April 11, 2pm; Tuesday, April 12, 7pm

Wonderment of Light as It Dances

In Wrapped, choreographer Meg Sullivan and designer Yvonne Boudreaux present improvisational modern dance performed on, around, and through an architectural sculpture on which visual images are projected. The Transportation Project features scenes by playwright Genevieve Wiley set on a bus circling campus. But depending on the time and space (such as on a real bus), the audience may or may not know that the scenes are performances, altering our perception of what goes on around us.
Brockett Theatre, Tuesday, April 12, 7:15pm; Wednesday, April 13, 2:15pm

Stories of the Festival