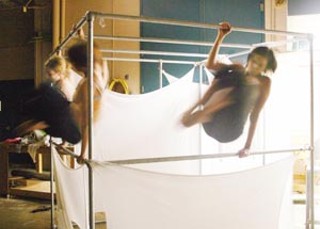 Okay, we can start with the play about the werewolf movie director having odd dream encounters with characters like Elephant With One Tusk Missing, Headset Voice, Man in a Sagging Suit, Sumo Wrestler, and Shark Man. Then we can go to the installation at the shuttle bus stop and walk through the large-scale skins. Tonight we should see the one about the couple trying to break up that keeps getting tripped up by language – English, Italian, and a strange third tongue. But if we can't get into that, we can catch the experimental dance collaborations by musicians, visual artists, dancers, and actors. Then we can finish with the part-English, part-German, part-dance, part-silent show about war, violence, and people turned into puppets in an abandoned warehouse.

There's a lot happening over at the Winship Drama Building this week, and much of it is so wild, so inventive, so provocative in its subject matter and approach and blending of art forms that for fans of creative risk-taking, it's like a carnival midway, a jumble of thrill rides sure to set your head spinning – but in a good way. So good that you'll want to squeeze in as many rides as you can.

Formally, the midway is known as the David Mark Cohen New Works Festival, and this year marks the third time that the UT Department of Theatre and Dance has organized the biennial event, named for the influential playwright, critic, and educator who headed the school's playwriting program from 1990 until his death in 1997. But based on the feel of the previous two festivals, it might just as easily be labeled a student revolution or a trip down the rabbit hole, for what you thought you knew about the department and the kind of work it produces and even where it produces work is often turned inside-out in it. The material is all by students, who experiment freely with narrative, style, and the interweaving of theatre, dance, music, and visual art. Taking over the Winship and its environs, they put up work in theatres, classrooms, odd corners of the building, and outdoors, getting it up and down in a matter of days, like some quick and dirty guerrilla arts operation. This year they've packed eight days with a full 70 performances of more than 30 events: plays with music, dance with text, films about dance, solo performances, theatrical inquiries, interactive installations, visual dramaturgy, works on stages, under stages, at the bus stop, on the buses.

Faculty members Suzan Zeder and David Justin may be listed as producers this time around, but they'll tell you that every step of the way, the students run the show. "Each of the proposals for a festival project had to be pitched. It had to have a budget, it had to have a narrative, it had to have a creative team," says Zeder, head of the school's playwriting program. "The students designed that application procedure, they read all of the proposals, and they came to the decision of what the festival was going to consist of, and they had to be very responsible not just to their own projects but to the festival as a whole." And they've been just as involved in the nuts-and-bolts execution, attending to the 19 guest artists who'll be coming in from around the country, to publicity, and to staffing the 30-plus productions. "The students are taking very active roles as entrepreneurs," Zeder says. "I think one of the things that they're interested in is this ability to do it themselves," says Justin, an assistant professor of dance and artistic director of UT's Dance Repertory Theatre. "Because they know that when you get out of here, in order to make new work happen, you have to have some skill level in so many areas." This festival is a place where students have the freedom to play with the tools of various disciplines, with different means of expressing ideas, emotion, and drama, without the pressures that go along with full productions. "That's very much the way we've tried to design the festival," says Justin. "So that people learn how to engage in those conversations and how to build work collaboratively." Carson Kreitzer is one of the students for whom the festival represents that kind of benefit. The Michener Fellow (who's already a nationally acclaimed playwright) says that having her new work Flesh and the Desert in the festival (which, full disclosure, this writer's wife, Barbara Chisholm, is performing in) has enabled her to pursue a new direction in telling its story. "The interdisciplinary push we were given really inspired me to find a composer," she says. "It's a very nontraditional play – it's a kaleidoscopic portrait of Las Vegas and follows three couples in various stages of love – and I'd had a workshop reading of the play in New York last summer, and one of my friends said, 'You know what might help you give this a coherence is a score.' And I just had a feeling that I couldn't do the next rewrite until I learned what music is in the piece." Through another student, she was able to make a connection with Kristi McGarrity, a student composer in UT's School of Music, and the two have spent several months now collaborating "intensively on the soundscape of the piece." Kreitzer, who's in the second year of her fellowship, considers it "an incredible learning experience" that might not have happened were it not for the festival. "Getting across the street to the School of Music is a lot harder than you would think, and it's not something I ever did in the year without the New Works Festival," she says. "I'm so grateful to have that cross-pollination. That really feels like what I'm here for." Zeder agrees emphatically, going so far as to say that the festival is "not about producing new work. It's about developing the kinds of relationships where new work can be created." That makes UT's festival something of an anomaly in a culture where new works are frequently served up to gauge their commercial appeal, where product trumps process. "A lot of people have new play festivals [with the plays] in full production, and a lot of people have reading festivals, but it's this hybrid in the middle that we're really looking at," notes Zeder. "Carson is having two rehearsals, a tech, and two readings. And that's it. But that's deliberate, to keep it in a box that doesn't expand it to saying, 'It all has to be here.' It's not all about the costumes, it's not all about the set, it's not all about the production. We can deal with that later. The things Carson can focus on are: What's the relationship between music and text, how do actors begin to serve that music and text, and how does she look at this part of the puzzle in three dimensions and with an audience?" Ah, the audience. Even when the focus is on the process of developing a new work, you still need people in the house to respond to whatever the process has cooked up. The department considers it very important that its students be one another's audiences in the festival, and to that end it has suspended all classes during the eight days that it runs. That also leaves students free to attend the master classes and workshops by guest artists scheduled every day before the performances begin. But mostly it's so they can see one another's work. The schedule has been worked out so even students in productions can see every other production in the festival. Of course, the department is happy to have those of us outside the school come witness the excitement as well. And one of the benefits of this year's festival's underwriting by the University Co-op is that every performance is free.

That doesn't mean it's easy to get into every show. Many of the performances are in spaces with limited seating, say 50 people, sometimes fewer. And the turnout can make for heavy competition for those seats. "Last time we had lines around the block. We had 5,000 people come through this building in the 10 days [of the festival]," says Zeder. "Now, people have said, 'How can you handle any more?' And I said, 'I don't know. We'll just give them more things to see.'"

You thought it was tough getting into a club at SXSW. Fortunately, the producers have scheduled performances in the smaller venues starting on the hour and those in the larger venues starting 15 minutes after the hour, so audience members who are not able to get into a smaller venue have the chance to get to a larger venue and still see a show in that time slot. So be a little flexible when it comes to what you're seeing. Look over the schedule and figure out what looks good.

The midway is waiting.