Stephen Mills' journey into the Holocaust leads a community toward tolerance

The Holocaust was not supposed to be Stephen Mills' story to tell. He is not a survivor. He is not from a family of survivors. He is not Jewish. He is a choreographer of ballets, and how can the Holocaust be expressed in the art form of Swan Lake? Even so, this unparalleled human tragedy has had a powerful claim on Mills' interest since he was in high school, and in recent years – especially since 9/11 – he has felt drawn as an artist to tell part of its story.

This weekend, that impulse will be realized with Ballet Austin's premiere of Mills' ballet, Light/The Holocaust and Humanity Project. But the 18 months leading up to this production have been about more than the creation of a dance. They've been about an artist's personal journey to discovery, to learn more about a kind of suffering that he will never know and how to honor those who lived it and keep their story alive when they have passed on, to learn how he can carry the torch of tolerance in his community. And through him, others have joined the journey: dancers, board members, educators, citizens throughout Austin. Mills' dream has grown from a dance into a march for understanding and compassion, a community venture between Ballet Austin and the UT College of Education involving lectures and workshops and a town meeting, with the support of the Holocaust Museum Houston, the Warren Family Foundation, Jewish Community Association of Austin, Austin Independent School District, and the Anti-Defamation League. Here, Mills and BA Managing Director Cookie Ruiz share part of the story of why Mills came to tell the story that was not his to tell and how it has led this city toward tolerance.

The commitment to do this project came September 12, 2001. Stephen did talk years ago about doing something on the Holocaust. He was interested in it as far back as six, seven years ago. But the real change in the impetus to say, "We're going to do it," that came September 12. He said, "I've never felt as hated as I feel today." I remember saying, "Excuse me? What do you mean?" And he said, "As a nation. I feel so hated as a nation today. I am convinced that from this point on I must have a deeper conversation with my audience." We didn't get there immediately, but he moved to doing non-narrative world premieres. But moving into a social justice dialogue, that was really born of September 11.

September 11 was significant to everyone. That Tuesday, we were just about to start class, I think, and the planes crashed, and we turned on the television, and like everyone we just sat in front of the television with our jaws on the floor in disbelief. I was working on Romeo and Juliet at the time, and I was trying to find some reason to do this ballet, because it felt really hollow at the time. "Why am I doing this? What point does this have? What relevance does this have in my life, as an artist much less as a person?" That sort of started the conversation with me. So this work has been trying to find a little deeper conversation with myself as an artist.

Stephen only says important things. He doesn't chatter a lot. I felt he had spoken with artistic leadership, and in my mind I thought, "This is going to be an interesting journey." I knew even that day that he had set the rudder in a different direction.

I've always felt that people have preconceived ideas about what ballet is supposed to be. And while I come from a ballet background, I also have a deep modern background, and contemporary artists have always talked about political issues. I felt it important if I was going to continue to work as an artist, I was going to have to challenge the audience to move and think differently sometimes. That's not always the case. Theatre is also supposed to be about entertainment. But I don't want to work in a medium that's pink tutus every day.

Naomi Warren is the founder of the Warren Fellowship, which started my educational process on this subject. She's probably one of the most generous and good-hearted people I've ever met, and her sharing of the experience and helping us through this process has been really amazing.

Naomi Warren is a survivor of three camps, the last of which was Auschwitz. She was the first survivor that Stephen met. She honored him by sharing her story, and he honored her by sharing his intent. He said to her, "I am here to ask for your permission." She said, "I am but one." And he said, "I am telling you that if you say no, I will not take this journey. I will not do this work." Everyone else in the room – her daughter, who's been the president of the Houston Anti-Defamation League; her son; the executive director of the Holocaust Museum Houston; members of UT-Austin – felt there was something historical [happening]. It felt symbolic. It felt important.

The whole conundrum in the situation was if the community decided it was not appropriate to do a work about the Holocaust, perhaps it was not a good idea. Because it can be very polarizing. I decided if a survivor told me that I shouldn't do it, I wouldn't do it. If a survivor said to me, "That would be too painful" or "That is insensitive" or "You can't possibly tell this story through this art form," then I would back down. I never encountered that. I only got words of encouragement and offers of help. People were obviously curious: How will you do this in a ballet? But they never said, "Don't do it in a ballet." 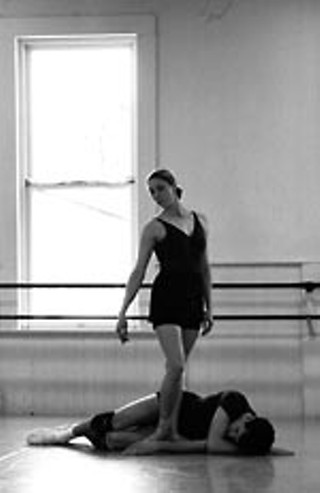 The thing is, there's no way you can represent the Holocaust in any artistic medium. It's too complex. It's too horrific. There's no way you can even come close to showing that kind of degradation and horror. But when you make someone's plight personal, then people are more apt to act. It's not simply a historical footnote. It becomes real for people. So I decided to make the story about a survivor, the survivor who left that camp 60 years ago and that person today and the conversation they've had with each other every day since then. My goal is to make it a personal experience for the audience, so they can appreciate in some way how it affected peoples' lives.

When Stephen came back from his trip this summer [visiting death camps in Europe and talking with survivors], it was almost overwhelming. He almost said, "I cannot do this." Then [he came across a quote] that said, "There are some things that are too large to write about, but nothing that's too small." And when he read that, that was the piece that [let him say], "I can do this after all." That's when he decided, "I cannot represent the entire Holocaust. But what I can do as an artist is I can have explored this fully, and I absolutely have the right to give my impression of one person's journey."

These artists. They meet Wednesday night. After they have been creating this very intense ballet all day, they have this study group where they get together and talk about the latest books that they're reading on the Holocaust. This has been going on for months now. And now some of them are exploring books on genocide and different social justice issues. As artists, it's been fascinating to watch them grow.

Why is it important to look at the Holocaust and apply those lessons to today? One good reason I can think of is that 3.6 million people have died due to genocide since 1990. We're not doing so well today. Sudan and Rwanda and the genocide that's continuing as I'm sitting here talking.

Take it on back to Austin, Texas, wherever you want to take that: "Burn, baby, burn" or any altercation that happens against anyone who's different in our community. It still comes back to what is our personal responsibility. Collectively, as a community we can say that we will not tolerate acts of hatred. We will not tolerate hate crimes. We will rise up and do something about that. Every single time we will hold person or persons accountable for those acts. There are no simple answers. I have learned that you don't sit down to talk about curing hatred or ending racism. But continuing to not discuss is not an option either.

I do know that I have become much more politically active [as a result of this project], and I can only imagine that growing. We live such sheltered lives here, and if [I was] ever in a situation where [my] country just turned around and ate [me] up, and [experienced] that whole sense of abandonment, there's no way I could not maintain my activism. It's just become me now. I was always interested, but now it's very different.

This is truly Stephen's journey, and he's truly allowed us to take it with him. An artist has to let you in. This can be an intensely private experience. It's an experience Stephen could have held much more closely to his chest. As he has grown as an artist and an artistic leader, I think he realized that this project had the capacity to inform a lot of us, and we all had an opportunity to grow. He's been phenomenally generous in allowing us all to grow with him, and I mean all: the board, the people from the community on our committee, our guild, all – anyone who would listen.

Through March 31, The Coexistence Exhibition

Free outdoor show of international artwork on the theme of coexistence. Developed by Jerusalem's Museum on the Seam. Auditorium Shores.

Central Texans discuss the implications of the Holocaust on their community today. For more information, call 476-9151 x200 or visit www.balletaustin.org/light.