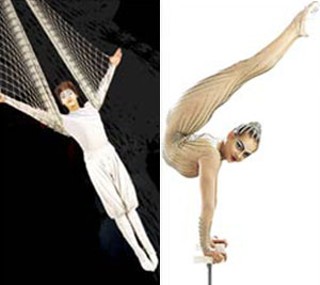 Everyone who knows the name Icarus knows how his story ends: The flying boy fails to heed his father's advice not to soar too near the sun lest it melt the wax holding his man-made wings together and so plummets from the sky. From this sad finale most of us have taken the lessons that: a) father knows best, b) you'll come to a bad end if you go higher than you're meant to, and c) flying just isn't that safe.

Considering that Varekai begins with Icarus' tumble from the heavens, you might expect this Cirque du Soleil spectacular to be considerably more earthbound than most, reinforcing that idea that human flight is a dangerous thing. But no, this show seemingly wants to put the lie to that notion, bringing Icarus down in a mysterious forest, then leaping skyward again and again with acts that convey the thrill of slipping the surly bonds of earth. Four women dangling from trapezes form themselves into living sculptures suspended in space; two men twist and curl their bodies around each other as they hang by straps to a bar far above the floor; a woman bends herself around a metal hoop high in the air; men launch themselves from oversized swings and become human missiles, shooting up, up, and away; even the man who fell to earth returns to the sky, lifted off the ground in a net that he transforms into a second set of wings.

These acts are astonishing, not least for the sense they provide of being free of gravity and daringly distant from terra firma, but also for their extraordinary beauty. The performers strike poses that allow you to contemplate and appreciate the human form in space – the back when it arches, the arm as it thrusts outward, the legs as they fork – and they shift position with such elegance that every fluid motion is its own dance, its own work of art. Often, because the performers are so high in the air and because Eiko Ishioka's extravagant costumes suggest fauna, you're put in mind of creatures of the air, a bird gliding on the air currents or swooping toward prey. These artists possess that natural grace.

Not all the pleasures of Varekai are airborne. The forest, represented by dozens of poles, which the animal-like characters climb and perch on, swaying, like pandas on bamboo, is hypnotically fascinating and rich with surprises, as set designer Stéphane Roy has seeded the floor with holes as in a prairie dog town, through which figures abruptly vanish and pop up. A troupe of acrobats in brightly colored and curiously bulbous outfits that give them the look of a forest of mutant tropical fruits makes dazzling slides and spins across the floor. Octavio Alegria infuses that venerable art of juggling with freshness, at one point popping ping-pong balls from his mouth to stratospheric heights. Gordon White, as a kind of demented inventor in this otherworldly landscape, glowers, bellows, and otherwise makes like a mad scientist gone native in blasts of amusingly gruff comic relief. Broader and sweetly schtickier are the clown duo of Jordi Deambulants and Joanna Holden, he the powder-blue tuxedoed, woefully inept stage magician, she the powder-blue eye-shadowed, even inepter, perpetually-falling-on-her-keister magician's assistant. Then there's the apple of Icarus' eye, La Promise, or the Betrothed, who first appears as a kind of bright golden winged lizard, but who later metamorphoses into a beauty who balances on canes, with Irina Naumenko fluidly bending her body into impossible shapes.

Still, it's the sense of flight that drives this production. You watch Anton Chelnokov sliding so delicately and yet so effortlessly through that netting and you can sense the wonder that Icarus might have felt in rising above the earth for the first time, the sense of liberation, of freedom. By the time the acrobats are propelled through space off the Russian swings, and you see human beings truly soaring, unaided, carving the air like birds, like bullets, you know what Icarus felt, what caused him to forget his father's advice, that exhilaration of flying.