In Kirk Lynn's playful and wistful 'The Jinn,' three couples with magic lamps find out if what they wish for is really what they want 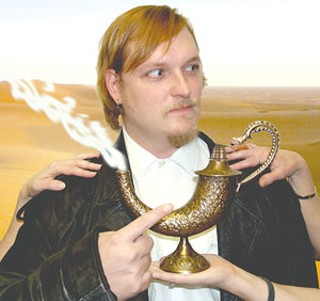 The Blue Theater, through March 12

Apparently, Mick and the Stones were misinformed: You can always get what you want. At least you can when you possess a magic lamp, as the women in Kirk Lynn's play The Jinn do. Jennifer, Jen, and Jenny each have a lamp right out of those olden tales of enchantment, the kind that, with a little rub, can help you get whatever you wish. For Jennifer, the youngest, who just got her lamp, that may mean wishing herself into a relationship (or bed, anyway) with James, the hunky waiter she just met. For Jenny, the eldest, who's had her lamp since her honeymoon with hubby Jimmy decades ago, it might mean wishing herself out of a marriage gone unbearably stale. For Jen, who's between the twentysomething on the one hand and sixtysomething on the other, it might mean wishing for a way to shore up her crumbling marriage to Jim.

The trick with this lamp is that it isn't enough to wish for whatever you want; you have to ask for it, and not from the genie of the lamp – the sly, haughty, enigmatic, not always helpful, and, particularly as played by the artful Robert S. Fisher, bristly jinn of the title – but from someone who can give it to you. This means the wishers can't rely upon a supernatural agent to do all the heavy lifting, as in most such fantasies. They have to act themselves and deal with other people to get what they want. So how badly do we want the things we wish for? Badly enough to do something about it? How much responsibility do we take for our own happiness?

This is Kirk Lynn dipping into the well of desire, a spot he's visited in earlier plays and plumbed with some success. Here, in testing the depths of our desires, he also explores their shifting nature in the different stages of our lives, how they're shaped by age. For young James and Jennifer, the weight on their lives is all the future, while for the elderly Jimmy and Jenny, it's all the past. For Jim and Jen, in the twilight between, there's equal pressure from past and future. Time ahead equals possibility and freedom; time behind, history and experience. The Jens and Jims are struggling to decide what they want to hold on to and what to let go of, and the tick of the clock, the beat of the pulse, the turn of the season pulls them one way or the other with a force as sure as gravity.

"That voice is dripping with longing," the jinn says of Jennifer after he plays back a tape of her, and you can catch a soft yearning in Amanda Garfield as she speaks, that youthful desire to connect with someone and to be connected with, mostly physically. But really the observation could apply to any actor in the dirigo group's premiere production. Director Ellie McBride has seeded the clouds of desire here with a sense of being incomplete, so that that ache to fill that empty place within drizzles from the lines of every member of this capable cast. It's especially potent in the performances of Meredith McCall and Robert Pierson; their Jen and Jim are hurt, angry, the bonds between them frayed but not all broken, and you sense in them a doubt about throwing it all away, a fear of what they'll lose that they may never get back.

It's a thoughtful, deeply felt story hidden under a bright and fanciful umbrella. In addition to the magical gent from the lamp, Lynn has stuffed his play with smoking lamps, a smoking tape recorder, a working shower, rainstorms, cascades of two-dollar bills from the rafters, Muzak Dylan, and a volleyball game. The dirigo group hasn't the resources to deliver all these effects as slickly as Lynn's home company, the Rude Mechanicals, but what they do create has the pop of the unexpected delight. More importantly, the show captures the spirit of the script, its sense of both the dreamy playfulness of the wish, so easy and fun to conjure, and the human, often painful yearning at its root, so hard to satisfy. But maybe those guys got it right after all: If you try sometimes you just might find you get what you need.