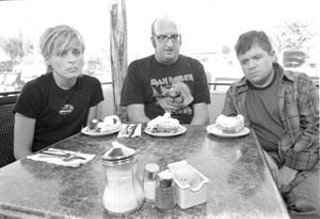 Austin hasn't gone this agog for a live revue by the subjects of a documentary since the madcap cast of Titicut Follies barnstormed the Vulcan Gas Company, but the red-hot juggernaut the Comedians of Comedy tour (and the Michael Blieden-directed tour film) is a veritable stand-upalooza of today's freshest comedic voices. The Chronicle recently caught up with tour mastermind and headliner Patton Oswalt in advance of his Emo's appearance with tour mates Brian Posehn, Maria Bamford, Zach Galifianakis, and special guest Eugene Mirman.

Austin Chronicle: What was the impetus for this tour?

Patton Oswalt: I was performing at a comedy club in early 2004 with David Cross and afterwards we got a lot of e-mails from fans saying they really wanted to come see us, but they couldn't afford the cover charge, two-drink minimum, plus parking, etc. I started realizing there's not only this whole new generation of smart, creative comedians coming up, but a new generation of smart, creative comedy fans as well. But comedy clubs – by necessity, cuz their operating costs are so crippling – have to cater to people in their mid- to late 30s, with steadier incomes. However, once people start reaching that age, for the most part they start to calcify in their tastes. So you've got these new comedians being kept away from their more open-minded fans, and vice versa.

AC: Is it true that Netflix funded the film?

PO: Netflix, Halliburton, and this white power group called "You Can't Spell 'Jew' Without 'Eeeeeeew.'" Halliburton dropped out when they saw we were letting black people into the shows.

AC: For stand-up über-fans, this development of new-school comics playing rock clubs is an exciting recoil from the comedy boom bust.

PO: I think it's a larger version of what happened in the early Nineties, with the whole alternative/coffeehouse thing; comedians who did comedy because they truly loved it, not because they wanted a fat paycheck from Laffholes. The DIY ethic goes both ways, because the audience sees you going out of your way to perform for them.

AC: Is the charge of playing these stickier venues that you're circumnavigating a potentially papered room that would just know you solely from The King of Queens or come to see "c-o-m-e-d-y spelled with a series of bananas," as Maria once put it to the Chronicle?

PO: Completely. We're being given a chance to bring in an audience who specifically wants to see us. People who are fans, who want to hear favorite bits, but will also support you when you experiment.

AC: But then too, how much cache do you also place on preaching to the unconverted?

PO: There's definitely a rush to winning over an indifferent crowd. That's why I still do regular clubs in out-of-the-way places. But I hope the tours – and this film – will bring these younger audiences into the regular comedy clubs.