Just two weeks before workers raised the blue-and-yellow tents of Le Grand Chapiteau on the grounds of the former Robert Mueller Airport, Cirque du Soleil officially unveiled KÀ, its new production in Las Vegas. Only slightly less jaw-dropping than the acrobatic feats that have become part of the Cirque's trademark was the fact that this was the company's fourth resident production in Las Vegas alone. It now joins the resident production La Nouba in Orlando; two productions currently touring Europe; two touring Asia; and one touring North America – Varekai, the very one which is ready to start dazzling Austin audiences this weekend. In two months, Cirque will commemorate its 20th anniversary with the debut of still another show, yet to be titled, at its headquarters in Montreal, and planning is already under way there for the fifth Vegas production, reportedly revolving around the music of the Beatles. To keep this many trapeze artists in the air at once requires a workforce of more than 3,000 individuals from 40 different countries, 20% of them artists of the highest caliber, of whom it could easily be said, they're the best in the world at what they do. 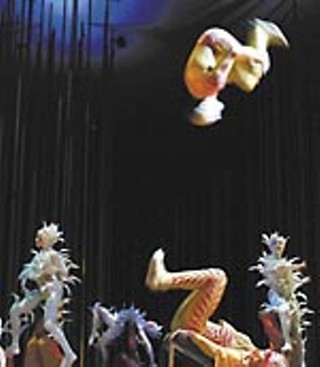 This is no mere traveling tent show, but a global entertainment empire, one that has sustained a staggering rate of growth for more than a decade and shows no signs of stopping, despite the fact that it is at heart peddling an exceedingly old-fashioned, largely low tech form of entertainment, the circus. Competition from film, cable, DVDs, the Net, and the mind-blowing special effects that come standard on all such media these days hasn't diminished the appeal of Cirque du Soleil or the willingness of audiences to shed their iPods, abandon their cocoons, and plop down top dollar to sit under Le Grand Chapiteau. So what keeps the crowds coming? What makes Cirque worque?

Nicolette Naum can tell you. She was there in the beginning, when Guy Laliberté took a small band of Canadian street performers and hatched the first Cirque du Soleil. She wasn't part of the company then, but she and her husband at the time, Jean Besnard, were part of the country's extended family of circus artists and traveled all across the Great White North juggling, clowning, playing music, and doing acrobatics. And there were few enough of them then for Naum to be familiar with Laliberté and his Club des talons hauts. "We knew each other," says Naum. "We knew the type of work that each other was doing. We had no big circuses in Canada, no big circus tradition, so the way we approached it was different." With Laliberté, the difference was theatricality and extravagantly imagined universes in which traditional circus acts became all the more wondrous, mythic. It won Cirque du Soleil immediate acclaim and legions of wide-eyed fans.

After seven years of watching Cirque's popularity and organization grow and grow, Naum finally signed on herself, initially on the casting side, helping find, recruit, and place the incredible gymnasts, dancers, clowns, martial artists, musicians, singers, and physical artists who make Cirque's fantastic worlds come alive. In 1998, she switched gears and embarked on a three-year stint as artistic coordinator for the European tour of Quidam, after which she was recruited to join the creative team for Varekai, then still in development. Once the show premiered in April of 2002, Naum became its artistic director, and she continues to serve in that capacity today. 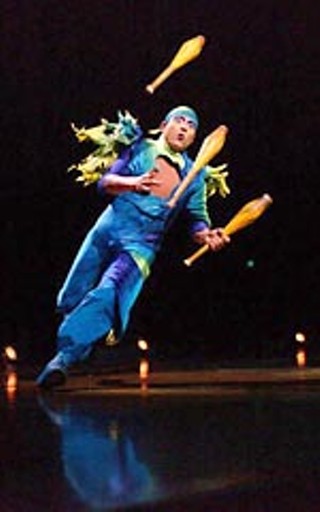 What she's seen and experienced for herself in all that time and all those positions is an unwavering commitment by the organization to create the finest circus experience that it can. To that end, Cirque du Soleil is willing to scout the wide world for artists: in far-flung festivals for the arts, in organizations and competitions for athletes, in the Olympics, and, yes, in traditional circuses. Wherever it might find a champion gymnast or athlete or an exceptional theatre artist or musician, Cirque will go. And when it sees one it likes, it will do what it can to convince that person to run away with the circus.

Of course, life under the big top isn't quite the carefree adventure of a childhood daydream. It's work, and lots of it: nine performances a week on top of a constant training regimen to maintain one's skills at the highest level. And once you're in a show, that is your life for months, even years at a time. That means nonstop touring, adjusting to a new city every six to eight weeks, and every move means moving a small city: 50-60 artists, 80-90 technicians, five cooks, administrative and tour services people, the husbands and wives and children of all of them, and the teachers for those kids. It's a massively complex enterprise, made all the more complex by the fact that so many different cultures are involved. The cast of the Varekai company alone represents 14 nationalities. Cirque has to be sensitive to all these factors. The logistics of touring are tough enough, but they can be mastered through organizational skills: working out the number of trucks to haul 1,000 tons of equipment (55), the number of workers to raise Le Grand Chapiteau (80), the number of HVAC units to heat and cool the tents (seven), the number of days to get the Cirque du Soleil village up and operating (six), and so on. Taking care of humans in such a framework is much trickier. One must account for variables that can't be readily measured or quantified: emotional health, creative stimulation, the ravages of time. As Naum puts it, "If you do this for six months, it's one thing. If you do it for two years, three years, it's another thing. You see the same people. You work with the same people. That can be challenging," particularly if you and those people don't even speak the same language or keep the same customs.

But Naum notes the longstanding importance of openness to difference and diversity in the company's philosophy. "It's part of what made Cirque du Soleil what Cirque du Soleil is. It's part of what circuses are," she says. The unusual, the offbeat, the strange, has traditionally been valued in the circus; it's what keeps the audiences coming in, that thing that they've never seen before. Cirque extends that concept beyond the novelty of an act to an appreciation of what every individual, every culture, every creative idea, can contribute to the whole. "Learning to be open to difference is part of the process" of becoming a member of this circus community and one of the ways in which "Cirque really takes good care of its people."

That openness may be the single most significant key to the Cirque phenomenon. You see it informing the operation of the organization on all levels and at all points in the life of a production. When a new show is being conceived, the Cirque creative teams are supposed to open their imaginations to new ideas, new visions, new approaches. You might think that the larger Cirque du Soleil gets, the more it has at stake and thus the more inclined it would be to stick with what works and just recycle its successes. But Cirque resists that kind of repetition, Naum insists. "For sure, when you look at the different shows of Cirque du Soleil, there is a signature," she says, "but I cannot say it's a formula." Each show is driven by its own distinct creative vision, and whether it's water as in "O", birds as in Alegría, gypsies as in Varekai, or the Beatles, it's that vision that opens up the possibilities for the artists on the production to explore new concepts, move in new directions. Cirque's openness to reinventing the form has always been at the foundation of its success, and each new production shows that it continues to be.

The principle of openness extends through the life of a production. It's integral to the development phase as the members of the creative team discuss, debate, and occasionally fight over the ideas being brought to the table. Every contribution must be carefully considered in the context of the whole. That's a process that requires time, and Cirque is open there, too: allowing for dozens of months to work out all the details of a production and to train the performers and fully integrate them into this imagined universe. And even when a production has proven successful and been on the road for years, Cirque is open to change in it. The company wants to keep the artists engaged in their work and continuing to grow, so it plans for that. One of Naum's responsibilities as artistic director of Varekai is to consult with the artistic coordinator, who monitors the show on a daily basis, and the coaches, who work regularly with the performers, to discuss the next step in the evolution of their acts. The changes won't be so radically different that it strays from the universe conceived by the director, but they will give the artists room to challenge themselves and stay fresh in their work. It's a practical and sensitive consideration of the working performer.

Of course, when all is said and done, the most important kind of openness in the Cirque du Soleil philosophy is the openness to dream. Each and every production creates an opening into our imaginations, where the most fantastic things occur. It is that curious blend of the familiar and the unfamiliar that we know from dreaming, and people keep streaming back to the blue-and-yellow tents to experience that in their waking life.

Naum keeps an eye on that. She will watch the audience when she's at a Cirque performance, and the moment she enjoys the most is when she can "touch the emotion." She sees it when the eyes open wide, not in a way that's just admiring of a performer's skill but in a way that shows this member of the audience has left the everyday world behind and entered this other world, where anything can happen. "The people who started Cirque 20 years ago were visionaries," she says, and through all the productions, all the growth, all the show business, they've stayed true to their visions.