The packed house at Zach on Feb. 12 showed that Austin was ready for Anna Deveare Smith, and Smith proved herself more than ready for Austin 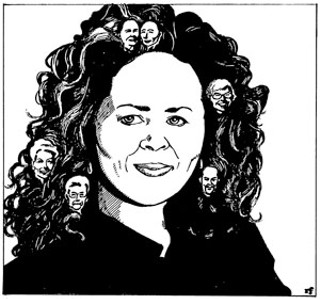 Judging by the extended applause when she stepped onto the Kleberg Stage on Saturday, Feb. 12, Austin was ready for Anna Deveare Smith. And in the hour and 45 minutes that followed, Smith proved herself more than ready for Austin. The noted playwright and actor had the packed house at the Zachary Scott Theatre Center enthralled with the excerpts she presented from her signature works Fires in the Mirror; Twilight: Los Angeles, 1992; and House Arrest. The 250-plus patrons were held rapt both by the stories she shared, which spoke powerfully to issues of justice and morality, and by her skill at portraying other human beings, which was uncanny. And she gave the evening a truly personal touch with a series of "Austin sketches," portraits of several locals she had interviewed during a visit to the city last month and in the weeks following. As these segments were developed relatively quickly, Smith requested that the performance not be reviewed, but suffice to say that Smith, so remarkable at evoking her subjects' presence and character through voice and mannerisms, impressively brought her trademark skills to bear on our own Lone Star journalist Molly Ivins, Las Manitas founders Cynthia and Lidia Perez, Armadillo World Headquarters and Threadgill's head honcho Eddie Wilson, former Gov. Ann Richards, C.M. "Bud" Schauerte, and Zach Artistic Director Dave Steakley.

Smith didn't stop there. The following morning, she led a master class with two dozen theatre artists and patrons in the Zach rehearsal hall. The two-hour session wasn't a training ground in Smith's techniques – she said specifically that she doesn't teach what she does – but it did offer insight into her approach to her work, specifically the significance of text and the prominence of the person she is portraying in her creative process. For her, "the character is the playwright, the character is the director," and the decisions she makes are founded in that. Moreover, in performances, Smith feels such a responsibility to do right by her subjects that she becomes "a nun in service to the words."

One aspect of Smith's visit that was fascinating was her running commentary on Austin and Zach. This was no disengaged, generic touring gig, identical to any she might give at any institution in any city. At the performance, at the master class, even at the donor brunch that followed it in the home of Eddie Safady, Smith repeatedly remarked on the character of the city and on Zach as an agent for change in it. She spoke with familiarity of the theatre under Dave Steakley's artistic leadership, how its doors had been opened to more black artists, to more plays that speak to the lives of African-Americans and of gays, to a broader discussion of community issues and who makes up the community. She acknowledged and applauded what Zach has done and urged Steakley on to do more, to shake things up, to lead the way, certainly in the community but possibly on the national level as well. One word that could be heard in conversation after conversation about Smith's appearance: inspiring.

Could this be the start of a new relationship between Zach and Smith? It's premature to say, but this much is clear: Austin is ready.

By the by, Smith's presence in Austin continues this weekend, through ProArts Collective's production of her Twilight: Los Angeles, 1992, the powerful work she produced following the riots in the wake of Rodney King's beating by L.A. police. Carla Nickerson and Mark Anthony Banks, who both appeared in the Zach production of Smith's House Arrest, headline a cast that includes Curtis Polk, Joey Hood, Gina Houston, Margaret Hoard, Mike D. Garcia, and Hans Venable. The show runs Feb. 18-27 at the State Theater, 719 Congress. For more information, call 474-TIXS.