Down at the Jinn Mill

Robert Fisher as the Jinn

Kirk Lynn walks into a bar.

He's a native Texan (born in San Antonio circa three decades back), a tall, genial man who enjoys listening to the Wu-Tang Clan and their bass-heavy comrades, hunting pheasants with a Remington 12-gauge, and parsing the philosophies of Wittgenstein. He's also a popular and critically respected playwright whose works – the adaptations of Greil Marcus' Lipstick Traces and James Kelman's How Late It Was, How Late, the biographical spectacle of Requiem for Tesla, the strikingly original Faminly Trilogy, among others – have intrigued and edified countless theatregoers in Austin, across the United States, and even overseas. His latest script, The Jinn, opens this week, staged by Austin's dirigo group. It's the first full-length play he's written that hasn't been debuted, at least, by Rude Mechanicals, the renowned company of which he's been the resident playwright for almost 10 years.

And he walks into a bar. And the bartender knows him.

"Hey Kirk," says the bartender, setting up a cold bottle of Dos Equis, "you gonna tell me what your new play is about?"

"You wish," says the playwright.

"Kirk's play is all about desire," says Ellie McBride, who's directing it. "It's about what you want and what you wish for and how that can change over the course of a lifetime. Or a relationship. Because it's all about relationships, too. It's also about weather and umbrellas and a women's volleyball team and where jokes come from."

McBride takes a long sip from her cup of coffee. "That's something Kirk's been wondering about," she says. "Where do jokes come from? Who comes up with them in the first place, especially the ones everybody's heard, and what resonance do they have with real life?"

McBride is one of the four co-artistic directors of the dirigo group, the company that in 1999 galvanized audiences with their bold take on Eugene O'Neill's Desire Under the Elms and most recently presented their version of Neil LaBute's The Mercy Seat. The group's done a lot of impressive work in this town in five years, though its roster has weathered many changes since the days when Laura Somers, the dirigo ur-director, was in charge. McBride has been with the group since early 2002.

But The Jinn is the first full-length play she's ever directed.

"I've directed some shorter pieces," she says, "some shows for FronteraFest, for Austin Script Works and Austin Shakespeare Festival. And I've acted in full-length productions" – most recently, Rude Mechs' Cherrywood – "but this is my first time directing a big, stand-on-its-own show."

Of course, she can always count on the support of her other co-artistic directors: Lowell Bartholomee, Judson Jones, and Christa Kimlicko Jones – except that the latter two, husband and wife and wanting to explore the potentially more lucrative thespian big time, moved to New York City last year. Certainly that's problematic?

Amanda Garfield: Smoke gets in her eyes

"Jud and Christa are just as involved with dirigo as they were when they lived here," says McBride. "Really. They were in on the casting decisions, they're dealing with the printers and the marketing, all the stuff they'd handle if they were still in Austin. We're still the same group, with pretty much the same responsibilities, as we were before they left. And you know Christa's our literary manager. She's the first one who got the script, years ago, because it didn't seem to fit the Rude Mechs' usual style and Kirk asked her if we'd like to take a look at it." She smiles. "Christa and Jud got us the umbrellas, too – 40 umbrellas! Because it turns out you can get umbrellas for about two bucks apiece in New York."

"We need that many for the show," says McBride. "It rains a lot in this play. In the play. On the stage. There's rain following people around, there's a working shower, there's – it's very wet."

Which might pose a minor technical challenge or two?

"It hasn't been easy, I'll tell you that," says McBride, downing more java. "There's the rain, and there's the lamps – the Jinn's lamps – and they're supposed to be smoking. We're still working on that. And there's a tape recorder that's supposed to smoke, too." She shakes her head ruefully, but you can tell she loves it. "Here's my big directorial debut, and besides the usual work – the practical decisions, scheduling everything, budgeting, rehearsals – there's all this tech stuff, too. Fortunately," she says, "I have the best cast and crew I could, well, wish for.

"Kim Burke's been dramaturging," says McBride, "and she's just great; she's been so helpful with every aspect of this production. She's really my assistant director, my A.D. She's got such a good understanding of what the play is trying to say and how to get it across. And Chase Staggs, the set designer, he's working miracles. And Lowell's been shooting video, because there's this whole montage showing the characters living out their fantasies of fulfilled desire. And we've been working with a professional magician, trying to get the damn lamps smoking when they're supposed to, and Robert Fisher's doing the sound, and ... and it's all coming together, thanks to the people I'm working with."

And the cast? The trio of pairs, portraying a couple at three different times in their lives?

"It's a dream cast," says McBride. "It really is. You want names? Travis and Melanie Dean. Meredith McCall. Robert Pierson. Joel Gross and Amanda Garfield. And Robert Fisher as the Jinn."

Robert Fisher as the Jinn. So, not to put too fine a point on it, not to assume something is other than it might be, but: Jinn? As in, Aladdin's mystical pallie? As in, "I am the genie of the lamp"?

"As in, be careful what you wish for," says McBride.

And is this what she would wish for: this directorship, this working-a-full-time-job-and-grinding-away-at-the-theatrical-grist-mill-in-the-capital-of-Texas, if she had a chance to do it over?

"I came here from L.A.," says McBride, "because I wanted to get out of L.A. And Austin, well, you know it the first time, you can feel it the minute you're here: This is the place you should be. It's got art and culture, there's so much going on, but there's room to breathe, too. And the people are really laid back, but at the same time it's clearly a cosmopolitan and well-educated town. And here I am, directing the new Kirk Lynn play – the world premiere – for the dirigo group." She grins at me, shrugs. "What do you think?" 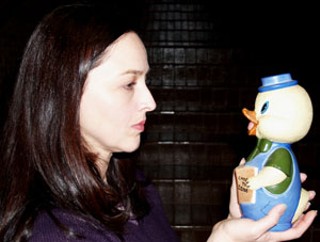 Kirk Lynn walks into a bar.

"I think I left something here last time," he tells the bartender.

"It's in the Lost & Found box," says the bartender. "Gimme a minute." He exits, then returns with a thick sheaf of papers: The Jinn.

"I, uh, took the liberty of reading it," says the bartender, handing the papers over.

"I'm still thinking of it," says the bartender.

"It made me laugh," says the bartender. "A lot. And I almost cried ... twice." He nods slowly, pointing at the script. "That's a beautiful fucking piece of work."

"Well, thanks, man. And thanks for holding on to it."

"So, listen," says the bartender, "when does it open?"

"Friday, February 18th," says the playwright. "At the Blue Theater."

And that's no joke.