A Score Is Born

The first thing you notice are all the musicians spread around the concert hall: drummers standing at the rear doors, trumpeters staggered down the aisles, French horn players here and there, a small clump of saxophonists just a few rows from the stage. About a third of the 75 or so players in Bates Recital Hall this Friday afternoon are off the stage and scattered about the audience seats, and they're not merely marking time in the house before rehearsal. They're stationed by music stands, instruments at the ready, waiting for the downbeat of the conductor's baton. You think: This is not some old-school, by-the-book, predictable classical concert setup.

And when the conductor does bring that baton down, unleashing an explosive series of musical attacks that assault your ears from all directions and that then give way at various times to brassy military fanfares, whimsical circus tunes, boozy sax solos straight out of a smoky jazz club, Old English hunting calls, horns that evoke trumpeting elephants and howling wolves and keening whales, police sirens, a march by a small band that literally marches up and down the aisles of the hall, and a blast from a shotgun, well, then you think: This is definitely not some old-school, by-the-book, predictable classical concert work.

Indeed, this is composer John Corigliano playing with sound and space, experimenting with instrumentation and scoring music without beats, trying to address a contemporary audience with a symphony that reflects the world they live in, the lives they lead. This is Corigliano's newest symphony, a work he calls Circus Maximus, and if that title suggests to you empire and spectacle and a public's constant, ravenous desire for distraction, and that suggests a culture that's eerily familiar and close to home, well, you're already in tune with Corigliano and where this new piece of his is going.

You see, this is not a composer who has pledged allegiance to the classical tradition of the 18th and 19th centuries, whose face is forever turned backward to the past. This is a man of his time, of our time, and the music he writes reflects that. This is the composer who wrote his first symphony about friends who had died from AIDS, who used the lyrics of seven songs by Bob Dylan as the basis for a new song cycle, whose first film score was for Ken Russell's trippy Altered States, after the director told him, "I want you to write the wildest thing you can do." He is a composer whose works have been recognized by some of his era's most prestigious awards, including the Pulitzer Prize (for his Symphony No. 2) and the Oscar (for his score to the film The Red Violin), and while prizes by themselves don't tell the whole story, here they serve as another indication of Corigliano's connection to his time, in the media for which he writes and the public recognition of that work.

Of course, as Dan Welcher, professor of composition at the UT School of Music, notes of Corigliano: "His music doesn't just win prizes. It wins audiences. People love his music; it's dramatic, it's melodically catchy, it's incredibly inventive and well-crafted, and it's genuinely emotional. The fact that it also stands up to the most rigorous critical analysis makes it unique."

Which goes a long way toward explaining why, when the UT Wind Ensemble finished its run-through of Circus Maximus on this Friday afternoon, conductor Jerry Junkin introduces Corigliano, who has been sitting in the audience hearing this work performed live in its entirety for the very first time, as "truly America's greatest living composer." 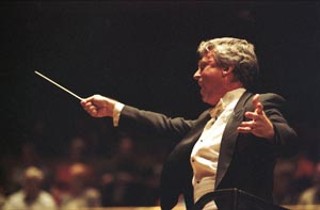 That this celebrated, elevated figure in the world of music should be in Austin, preparing for the world premiere of his third symphony – a work commissioned by the UT School of Music and written for the school's Wind Ensemble – says a lot about Corigliano and this school. For one thing, it says how much faith he has in the school to do justice to his work. The composer has been here before, twice through the School of Music's Visiting Composers Series, which allowed him to be in residence at UT. He's gone so far as to laud the school's composition program as one of the three best in the country. And he's been very pleased with the performances of his music. He heard the Wind Ensemble play an arrangement of the tarantella of his first symphony – "which is the hardest movement of the first symphony," he notes – "and they were amazing."

Junkin, who's directed the wind ensemble at UT since 1988, had been after Corigliano to write a piece for concert band for years, but the composer kept turning him down. He isn't the sort to dash off a piece for any old reason. "I don't just write," he has said. "I have to have a reason to write." And for a long time, he didn't have a reason to write a piece for concert band. In fact, he had more than enough reasons not to: lack of experience writing for wind instruments and brass; the size of the ensemble, which he found difficult to bring clarity to; and, as he has written, "The sight of a multi-staved-and-transposed band score still fills me with dread." And beyond the technical considerations, there was the question of what he would have to say in the music itself.

But over time Corigliano came to embrace those things that made him nervous about writing for concert band and use them to propel him into the piece. He wanted to experiment with sound spatially, to put instruments all around the hall and surround the audience with sound, but the practicalities of modern orchestral schedules – get the score on Tuesday, play it on Thursday – made that impossible. A major symphony orchestra would never be able to learn the new music and work out the challenges of sound traveling over distance in 48 hours. A concert band at a university, however, which typically rehearses for much longer periods, would be able to explore something like that, adjust to it, make it work. And putting some instruments in isolated choirs would enable Corigliano to keep their sound from being swallowed by the band as a whole and preserve a clarity of instrumentation. "These various things helped me solve the problem of writing for band," he says. "So while it was a hard thing, it was also the way to do it. It made it possible.

"Each time I write a piece, I always ask myself, 'Why are you writing this?' And the answer to that happens in the setting and shape of the piece. So, in this case, why am I writing a band piece for young people to play, and the answer was: One reason is that the bands can, because of the way they rehearse, actually deal with a fully spatial situation, which I always wanted to do, and that suggests to me the idea of the Circus Maximus, and that suggests to me the idea of sensory overload and decadence, which suggests to me the world we're living in and the world of a dying Rome, which had to have constant entertainment to distract it."

As the symphony came to take shape in his head, it grew increasingly ambitious. Given that this would be performed by a student ensemble, Corigliano asked Junkin if he should scale down his ambitions for the students' sake. But Junkin told him, "Don't hold back. They can do anything." Consequently, Corigliano says, Circus Maximus is "as hard as anything I've written for a major orchestra, maybe harder."

Although this Friday run-through is Corigliano's first time to hear the symphony performed live, he isn't able to relax and enjoy the experience. He hears the ticking of the clock in his head. He has very little time to spend with these young musicians, and he needs to provide them with as much feedback on their performance as possible. "I'm used to working in a very high-pressure situation, in which I get a rehearsal or two at most to make every change, every correction, spot every error," he explains. "So when I'm listening to a rehearsal, I don't listen to the piece. I listen to every moment of the piece with every part of me functioning [to catch]: Is that right? If not, what's wrong? If it's wrong, how do I fix it? I have to catch it. No one else is going to catch those things. Jerry is trying to do what I want, so if I don't want something, he has to know I don't want it. Even though I trust him enormously with being able to do everything, he still doesn't always know what I want because the notes aren't enough. So I'm busy looking at the music and making little remarks on it so when it's over I can stand up and start from the first measure and go through the last measure and illuminate them." When he goes to the podium to tell the students what he heard, Corigliano's notes take more time to deliver than the 35-minute symphony took to play.

It's exhausting – afterward he feels "completely and absolutely drained, like I was giving a performance" – and Corigliano describes this part of the process as "the very toughest moments of giving birth. It really feels like a gestation." On the other hand, he notes that it's "extremely helpful for a living composer [to be] going to an institution that welcomes the new and is used to dealing with the unexpected and new."

And how much of his presence here and the existence of Circus Maximus has to do with Jerry Junkin? "A lot," he says, and quickly. "I wouldn't just write this. I wouldn't have done something for band without Jerry in the first place. I needed someone I could really musically trust."