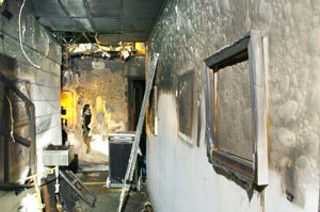 Inside the Guadalupe Arts Center (Photo By John Anderson)

Fire hit the Guadalupe Arts Center late Sunday, causing an estimated $650,000 in damage and wiping out studio and office space for some 75 artists and arts organizations, including Diverse Arts, Austin FilmWorks, Pro-Jex Gallery, Salvage Vanguard Theater, Jerm Pollett, and Bob Livingston. The blaze is thought to have originated in a second-floor studio, where linseed oil caused a pile of rags to combust spontaneously. The building was empty, but a passerby noticed the blaze and alerted the fire department around 1:20am. Some 50 firefighters responded to the call, and though the flames spread to a penthouse on the roof, they were able to bring the fire under control in about an hour. One firefighter suffered minor injuries, but he was treated at Brackenridge Hospital and released.

The building at 1705 Guadalupe has been a haven for artists since 1997, when developer Gary Peden renovated it into office, studio, and exhibition space and dubbed it the ArtPlex. Four years ago, Kevin Barry acquired the building and rechristened it Guadalupe Arts. He'd been continually upgrading the facility since, and in fact had just renovated the center's showpiece exhibition space on the ground floor. In a spectacularly bad bit of timing, the space was set to reopen as Vin Gallery on Tuesday. Work by 30 local artists was hanging when the fire started. Fortunately, because firefighters were able to contain it to a limited area, the paintings in the gallery suffered only minor smoke damage. They have been relocated to storage at the Gallery at Shoal Creek.

The tenants hit hardest were those nearest the source of the fire. For example, Slam Channel's Mike Henry and Kyle Fuller, who had been working on a documentary about slam poetry, lost cameras, a new G4 PowerBook, a pair of G4 monitors, and, most devastatingly, the hard drives on which they had stored 18 months of film work that can probably not be recovered. They were stunned by the loss.

Of course, they were far from alone. Monday, tenants shuffled through the building, eyes glazed over as they tried to absorb what had happened. The center was "a building full of shocked zombies," says Salvage Vanguard Artistic Director Jason Neulander, whose offices for the award-winning theatre company were hit hard by smoke and water damage. "Walking in there was heartbreaking," he says. "The last 11 years of my life was in those two rooms": posters of SVT shows dating back to 1993, programs, photographs, CDs, scripts, files, equipment, and more. Even though the office didn't burn, the smoke damage may render little in it salvageable.

Neulander expressed sympathy for owner Kevin Barry – "He has put so much money and love into the building." – but Barry was taking no time to feel sorry for himself. He was busy cataloging the damage, dealing with insurance, and trying to help his tenants. He was looking for a warehouse space in which all the tenants could move their stuff and see what could be cleaned and saved. Meanwhile, other arts groups immediately began offering assistance. Refraction Arts Project, which suffered its own loss a few months ago when thieves hit the Blue Theater, announced that half of the box office for its Friday, Feb. 11 performance of Celebrity Crush would be donated to Salvage Vanguard. (For more information, call 927-1118 or visit www.refractionarts.org.) No doubt more benefits will be forthcoming. Look here for further information.