The Jan. 14 Short Fringe program featured a humdrum radio thriller, a comedy about tourism, a graceful commentary on rape, a provocative performance about sexism, and a thoughtful, funny reflection on headlines 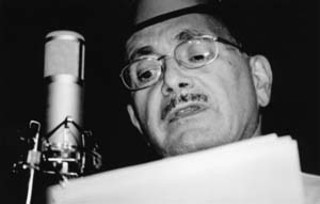 Friday night's Short Fringe program began with Lillian Kaufman Radio Drama's "The Fourth Man," a humdrum enactment of a broadcast thriller. The program notes suggested shutting one's eyes to enhance the experience, but watching the Foley artists create the aural environment was the highlight. Next was Loaded Gun Theory's "Baka Gaijin," a comedy about two fresh American tourists lost somewhere in Asia in search of "authenticity." They discover a remote resting spot hosted by Big Louie, a clownish local resident with an obsessive need to please the "pretty ladies." He ultimately fools them by his excessive stereotype of the ignorant native in order to make an easy buck. Erica Snodgeroth performed "Dossier of Pearls," accompanied by a woman's voice, prerecorded and played throughout, which recited the emotional turbulence and social silencing of rape. One poignant line was "Silence. I am allowed to say nothing." Snodgeroth, initially with a gag over her mouth, laid out various objects that symbolized trauma in memory and neatly folded a cloth around them, finally placing them in a box tied with a firm bow. The piece, written and directed by Cris Edwards, was graceful, poetic, and honest.

After intermission, Leslie Hollingsworth performed her slightly indulgent but provocative "Syncopation/Dissonance" with a jazz band of men. Behind a screen, a woman danced seductively in silhouette as Hollingsworth, plainly dressed, recounted artistic rejection due to gender. The male players marveled at a projected photograph of breasts. They exited and returned disheveled, still admiring. "Tits," they said in unison. Hollingsworth re-entered, scantily adorned in sheer garments, as the men huddled around her in a warped representation of power.

The evening concluded with "Objects in the Rear View Mirror May Be Closer Than They Appear to Be," written by Steve Barney. Three housemates reflected on the year by reading past headlines in the Austin American-Statesman. The piece was more about gimmick than performance but was simply done, thoughtfully orchestrated, and quite funny. In finale, the performers envisioned headlines promoting peace, hoping for a less tumultuous 2005. Can fringe theatre at Hyde Park help them, and us, to realize that dream? Stop by all month and find out.