Risk: It's What They Do

Tweet
print
write a letter
If you're paying attention, it's easy to see that there are few new frontiers left. Unless you include the frontier of the mind, in which case there's one right in the midst of us, FronteraFest, that annual Austin rite of regional theatre passage. Now in its 12th year, this eclectic gathering of artists from across the city and the state – and these days far beyond Texas and even far beyond the Southwest – ventures across our mental borders with their original, experimental, edgy short performance pieces.

The fest is best known for the Short Fringe – it's what really put the fest on the map: four weeks with four short performance pieces each Tuesday through Friday, capped by a "Best of the Week" on Saturday and a fifth week of "Best of the Fest," all at Hyde Park Theatre. But FronteraFest also boasts artists who provide not just their own work but their own performance space (Bring Your Own Venue); those who offer their houses as venues (Mi Casa Es Su Teatro); and those who go border crossing with pieces that don't fit into the Short Fringe's 25-minute limit (the Long Fringe).

No matter where the pieces are presented or what their length, the artists who mount them put themselves on the line in some way. As this year's Long Fringe gets under way at the Blue Theater, we asked someone from each production to tell us what makes their particular show risky for them.

All Long Fringe performances are at the Blue Theater, 916 Springdale.

The Short Fringe continues through Feb. 12 at Hyde Park Theatre, 511 W. 43rd. For this week's schedule, see the Theatre listings.

For a full schedule of all FronteraFest events, as well as information on ticket prices and reservations, visit www.hydeparktheatre.org.

Leonard's Car deftly careens between comedy and tragedy on a wild ride that takes artist mother Molly and her two adult daughters veering off the map when love collides with art's darker destructive side.

Russell-Ides: Leonards Carwas produced in Dallas last year, and as a writer I felt that I was cut out of the creative loop at crucial points. My motive in producing at FronteraFest was to stay in the game from inception to curtain and free upall the players. Break some rules. Break some creative ground. The risk is crankedincredibly when the producer isalso the writer, the set designer, the costumer, the publicist, and is constantly changing hats as fast as she can, but so is the thrill. And so far the director and actors arethriving and creating beautiful characters, and I am in creative nirvana.

Calvin's goals are simple: Win fame and fortune, and clean out the refrigerator. The obstacles to his quest are conniving co-workers, random surveillance, an utter lack of talent, and, possibly, long-dead Nazis.

Davis: I met [longtime FronteraFest participant] Jennifer Haley at the Vancouver Fringe Festival a couple of years ago and saw her fantastic Edmundo, and we brought her up to our space for a run. While she was with us, she raved about FronteraFest and Austin and the artists in the community, and it just sounded like a good fit for Butter. The company I work with, Equinox, is made up of big-city refugees who moved to Bozeman, Mont., a little mountain town, to make our own work, to up the ante on life quality, and to try to actually connect with an entire community and become part of its cultural fabric. The risk for me in taking this project on the road is Will Austin like it, too?

The Unbearable Marketing of Being, by Joshua Lellis
(Cameo Productions, in association with the Austiner Ensemble)

Milan Kundera's The Unbearable Lightness of Being serves as the muse for this comedy that intertwines the Stone Age inventor of the wheel, two medieval English wheelbarrow manufacturers, and two disgruntled Austinites fed up with a bleak workaday existence while struggling to make it as marketers.

Lellis: Id say what makes the project most risky is the number of characters in the play (there are 21 characters played by four actors) as well as the technical aspects of the production. The show takes place in three different settings, with three different groups of characters corresponding to each time period. Its a unique opportunity for the actors to try to delineate between so many characters so quickly while continuing to tell the story and be funny at the same time. Because technical resources are limited by the format of the Long Fringe, you have to bring the production down to a very personal, very human level, and by extension, to an honest, bare-bones kind of theatre.

A beautiful young dancer at a strip club in New Orleans is torn between her lover and her loyalty to the eccentric club owner who has befriended her. Warning: Contains nudity and very strong language.

Frank: Its risky from a fiscal perspective. People may not come and see the show because they find it too dark or too politically incorrect. Perhaps the show might tap into the spectators vulnerabilities. Another risky aspect of the Long Fringe is the self-autonomy one is given. Sometimes freedom can be a frightening thing; one is given enough rope to hang oneself. The Fest is essentially an open market theatre festival. One has to produce a product that is of interest to people, to the theatregoing public. One cant afford to be aloof or esoteric; one cant afford to be an Artist.

Bullock: I began reciting my poetry in front of Lubbock audiences when local singer/songwriter Cary Swinney began to offer me his stage during breaks, giving me time at every opportunity and inviting me to go on the road with him. I was able to test-market my poetry to many audiences in many bars across Texas, and I began to write more poetry that suited the bar scene. My audience was not a theatre audience, but rather a live music audience. Ive presented the show for the past 10 years, but only in Lubbock. Performing for new audiences is something I desperately want to do, so the risk in FronteraFest is the risk of uncharted waters. Im hoping to prove to a new audience and to myself that I do present something unique.

The Tanqueray Prayer Circle, by Malisa Hargrove and Rhonda Kulhanek

Life in a small Texas town can lead even the strongest of ladies to pass judgment from time to time, and although they struggle, Ethyl and Imogene manage to get by through the strength of their friends and the miracles of their prayer circle. Along the way, they unexpectedly discover the secret ingredient that makes their friendships, prayers, and casseroles so special!

Hargrove: I think its always risky when you do your own writing, as Rhonda and I do. Anytime you write something, its so much more personal in terms of how the audience does or doesnt accept it. If its original, you always reveal at least a little bit of yourself and your origins, and its interesting to watch the faces of the audience because you know that they are laughing at the parts of themselves that they recognize or parts they fail to recognize. We better all learn to laugh at ourselves. After all, we are living in a Red State!

Mao on Line One, by Kimberly Megna
(Championship Theatre Group)

It's the über-office from über-hell, but somehow Daniel and Lorraine manage to fall in love.

Artistic Director Kai Martin: The great thing about Frontera is that the audience comes with a certain expectation willing to give more, spread the safety net further, or even abandon certain conventions entirely. Not that wed come in and neglect an audience its not the Nineties anymore but its nice that nobody is going to scream Horseshit! when we turn on the flashlights and dance in the dark. If youre going to be an artist, you gotta put yourself out there, there is no halfway, and if you want to call that risky, then I guess it is. I dont think we need to be applauded for that necessarily, cause thats kind of our job, to put ourselves at risk. If youre not willing to do that, or if youre only willing to go so far with it, then its not going to work.

Ellen Bartel, artistic director, Spank Dance Company: Its inspired by one-minute sculpture, one-minute plays, things like that. Some people are not using music at all, some are using specifically composed music, and others are using found music. One of the dancers is using excerpts from language learning texts: Russian, Chinese, Arabic. All the choreographers have four dances. And it repeats like a carousel. It was risky last year, but we sold out. So this year, its only risky in the sense that theres only one place to go, and thats down. One thing remains the same, though. If an audience is going to sit through 40 one-minute dances, the entire show has to be flawless.

Danny and the Deep Blue Sea

In a rundown bar in the Bronx, two of society's rejects, Danny and Roberta, strike up a halting conversation over their beer, and this chance encounter sets up a journey toward redemption.

Weldon Phillips, Producer/Actor: My wife [Martinique Duchene-Philips] and I are producing and directing this piece. Its a story about two people with ugly pasts living under ugly circumstances and searching desperately for a way to connect. Were relying on the drive of the characters and the narrative to carry us, because we dont have a big budget and cant afford to splurge on production values not that FronteraFest has ever depended on those. The Long Fringe allows us to concentrate on performing the piece without sacrificing too much time to marketing, house management all the organizational stuff. Also, the festival has a built-in audience, and that allows us to reach more people than we would if the show were independently produced. 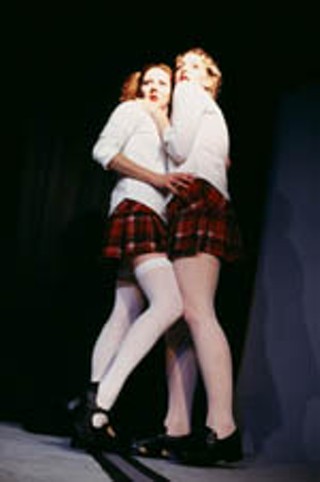 Where Are They Now??? A Fantasy Based on a True Crime

Where Are They Now??? A Fantasy Based on a True Crime, by Cyndi Williams
(Aunt LuLu Plays/Shrewd Productions)

Inspired by a lurid murder committed by two New Zealand schoolgirls in the 1950s, the characters find themselves dancing around seductive memories and difficult questions about guilt, denial, identity, and the betrayal of friendship.

Williams: The main thing thats risky about this project is that its fairly ambitious and we have a fairly limited amount of time to put it together. The first challenge was to take the source material used in Peter Jacksons Heavenly Creatures and figure out a way not to re-create the movie, but to make a script that was theatrical. Im co-directing with Julia M. Smith, whose work in The Philomel Project [at the Blue Theater last fall] really excited me. I saw this project as a dance as well as a play, so its been fascinating and fun to work with a choreographer like Julia, and she and I have decided to develop a workshop on creating text and movement, based on some of the things weve learned.