Though it has the episodic feel of a screenplay, 'Sonny's Last Shot' is, all in all, a satisfying evening of getting your jollies at the expense of the Texas Legislature 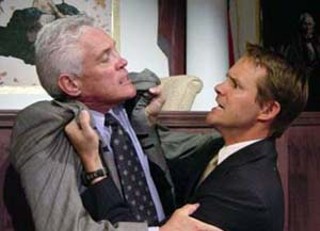 Sonny is a good man who wants to do good things for others. Problem is, he's a politician. Some would tell you that "good politician" is an oxymoron, but not when it comes to Sonny. Though he's a Republican, he's got more than a few Democratic leanings. He sees politics as being corrupted by a drive for money and power, and he wants to change that, so he introduces a campaign finance reform bill on the floor of the Texas House of Representatives. Of course, the entrenched old guard opposes it with a vengeance, wanting nothing to interfere with their brand of good ol' boy backroom backslapping.

You might be wondering what the "last shot" of the title refers to. Well, there's more to this play, penned by Lawrence Wright, than just politics. Sex, for instance, and Sonny's shot has something to do with that, as well as with his attempt to become the Speaker of the House. Wright's script was originally a screenplay, and the production has the episodic feeling often found in screenplays. Many of the scenes are little more than vignettes, but each follows logically upon the others, even when some seem to come out of nowhere, and all add up to a surprisingly moving story about morality, integrity, and, strangely enough, love and forgiveness.

Best of all, Wright's work is funny – quite funny. We're talking Texas politics here, and you'd have to try really hard not to make that funny. The language is often colorful (for instance, I've never before heard anyone, much less a woman, called a "catfish fucker" ), and there are more than a few sequences that generate big laughs, one of them being a seductive dance sequence as Sonny fantasizes so he can shoot – well, never mind. Another involves a bill that will ban homosexuals in all walks of life from ever having any contact with children. Sonny joins a quorum in order to stonewall the bill, which ultimately leads to him becoming a hero on the floor but a villain at home.

The set, designed by Valerie Light and director Marco Perella, is a bright and cartoonish representation of the floor of the Texas House, replete with neon signs representing various familiar Austin locales. While Perella has much to be thankful for, he is most fortunate in his casting. G.W. Bailey (of M*A*S*H fame) is fascinating to watch as L.D. Sparks, a lobbyist with, of all things, a conscience; Richard Dillard as Carl Kimball, a sexist, homophobic, gum-chewing Republican from Mineola, is consistently amusing; and Dennis Letts as Big Bob Bigbee, the speaker of the House, is outstanding, completely, hilariously Texan, and utterly believable. With performances as accomplished as these, it would have been nice to have the play move a bit more quickly. Because the scenes are episodic, the show doesn't always transition smoothly and quickly from one bit to the next, but all in all, it's a satisfying evening of getting your jollies at the expense of a group of people who deserve every bit of ridicule – and praise – that comes their way.