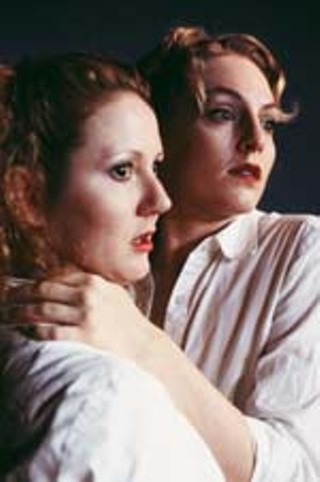 Shannon Grounds and Lynn Mikeska in Cyndi Williams' Where Are They Now?

This annual five-week collection of short theatre pieces at Hyde Park Theatre started back in '93 and has returned year after year to redefine the word "eclectic." Luckily for Austin, it sometimes manages to define "brilliant," too, although who knows what forms or qualities any of these nights of four to five performances of 25 minutes (or less) each will bring? Monologues? Plays in progress? Comedy improv? Cabaret singers? Avant-garde dance? Multimedia? A guy with a plastic comb and a piece of wax paper doing for the Nirvana songbook what Jimi Hendrix did for "The Star-Spangled Banner"? Co-produced by HPT and Austin Script Works, it's our own homegrown Gong Show, albeit sans gong, and (especially during "Best of the Week" Saturdays) it's a sure bet for off-kilter entertainment. And that's just the Short Fringe. The Long Fringe (plays of 90 minutes or less, filling nights at the Blue Theater), Bring Your Own Venue, and other FFest spinoffs will be manifest in the coming weeks, and we'll have your schedules right here.

Fri., Jan. 14: "Dossier of Pearls," by Cris Edwards; "Syncopation/Dissonance," by Leslie Hollingsworth; "Baka Gaijin," by Loaded Gun Theory; "Objects in the Rear View Mirror May Be Closer Than They Appear to Be," by Ryan, Robert, Tina, and Steve; "The Fourth Man," by Lillian Kaufman.

Sat., Jan. 15: Best of the Week, followed by an opening reception catered by Asti Trattoria.

Mao on Line One A certain Little Red Book viruses itself into the jargon-heavy world of the "uber office from uber hell," but nothing can disconnect the romance a-brewing between comrade workers Daniel and Lorraine in this new play by Kimberly Megna, presented by the Championship Theatre Group. Wed., Jan. 19, 9pm; Thu., Jan. 20, 9:15pm; Sun., Jan. 23, 8:45pm; Sun., Jan. 30, 4pm. $10.

Where Are They Now? is a fantasy based on a true crime, written by Cyndi Williams for Aunt LuLu Plays and Shrewd Productions, in which two New Zealand schoolgirls commit a murder that eventually cleaves their thick friendship in twain. We're imagining it's a more document-based take on Peter Jackson's Heavenly Creatures. Directed by Williams and Julia M. Smith, with music by Catherine Berry. Fri., Jan. 21, 9:15pm; Sun., Jan. 23, noon; Wed., Jan. 26, 7pm; Sat., Jan. 29, 4:30pm. $10.

All Long Fringe shows are at the Blue Theater, 916 Springdale, 479-PLAY. www.hydeparktheatre.com.