One of the leading lights of Esther's Follies' early years is gone. Bill Fagan, a gifted comedian and writer, passed away in San Antonio on the first day of the new year. He was 48.

Born into a large Alamo City family – he was the fifth of seven children – Fagan quickly distinguished himself with his wit and theatrical skills. He came to Austin in the Seventies to study drama at UT and soon found his way onto local stages, appearing at Capitol City Playhouse in Cabaret (in a gorilla suit), in a UT Department of Theatre revival of Company, and, in 1985, in the Groucho-inspired leading role in A Day in Hollywood/A Night in the Ukraine for Live Oak Productions. (In the Chronicle's review, Wayne Lemon labeled his performance "uncanny.") He also helped launch one of Austin's first improv comedy troupes, the Hilarions: Gladiators of Comedy. Most of his time onstage, however, was spent at Esther's, where he was inspired in works from Swine Lake to Cat! Musical on a Hot Tin Roof and as characters, from the sweater-clad host of Mr. Esther's Neighborhood to Wolfgang I'm-a-genius Mozart to the blond third of Peter, Paul, and Mounds. 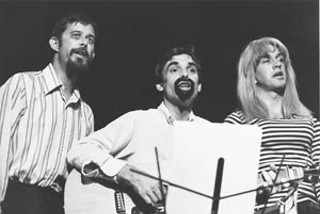 Fagan was born to comedy; it came to him as naturally as breathing, and his delivery had an ease to it bordering on nonchalance. No gag of his, verbal or physical, ever felt forced, and it was the funnier for it. Moreover, he was blessed with both a wicked eye for parody and a boyish charm that enabled him to say the most outrageous things – which was often – and remain appealing. But maybe that was his genuine good heart shining through. Follies founder Shannon Sedwick calls him the "sweetest person in the world," and Fritz Blaw, who waited tables with Fagan at the legendary Austin eateries Another Raw Deal and Buffalo Grille, says Fagan was "a great ray of fun in my life."

In the late Eighties, Fagan moved to Los Angeles, where he joined the West Coast incarnation of the Hilarions founded by Austin expatriates (and fellow Follies alumni) Michael Caldwell and Rachel Winfree. There he teamed with composer Jeff Scott to create a number of musical spoofs, including All About Christmas Eve, P.M.S. Pinafore: A Period Piece, the revue Bombed a Lot! The Music of Peter Buoy Wryder, and the two-act 'Til Death Do Us Start. The last few years saw Fagan return to San Antonio, where he stayed busy at San Pedro Playhouse, in productions of Titanic, Jesus Christ Superstar, Big River, Guys and Dolls, Jekyll and Hyde, A Little Night Music, and, once again, Cabaret.

He is survived by his six siblings – Sister Mary Fagan, Martha Taylor, Tom Fagan, Marian Fagan, Margaret Jobst, and Patrick Fagan – and countless friends and fans. He will be missed.