Top 10 Performances That Transported Me in 2004 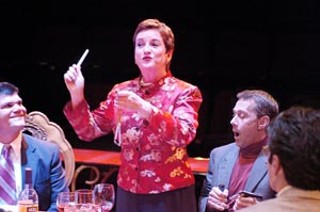 1) Where Nothing Falls II (Blue Lapis Light) Sally Jacques took her 2003 exploration of grief and comfort to a new site and a new level, the vastness of the Domain complex warehouse giving the work a monumental scale that inspired awe. Watching the dancers run, glide, and swing among a forest of towering pillars on a broad concrete plain heightened our sense of human isolation and fragility, and as the beauty of the visuals grew more epic and emotion of the score more sweeping, with the performers courage never yielding, it tore our hearts.

2) Hamlet (Ballet Austin) In the inspired hands of BA Artistic Director Stephen Mills, the Bards melancholy Dane became a fierce man of action, his forceful movements revealing his torment and rage for revenge. Desmond Richardson made a powerful prince, but across the cast, the dancers communicated the anguish of their characters in every impassioned gesture and step. Moving drama, in every sense of the words.

3) Midsummer Night's Renaissance (Conspirare) In a broiling June, no more divine haven from the heat could be found than Central Christian Church, cooled by the exquisite, tightly bound voices of this Austin ensemble at play in the fields of 16th-century choral music. My first Conspirare concert, definitely not my last.

4) Omnium Gatherum (Zachary Scott Theatre Center) Through an elegant dinner party that gave way to a gripping confrontation with the legacy of 9/11, director Dave Steakley and a sharp, committed cast gave us the end of the world as we knew it and the years most visceral, stimulating experience in the theatre.

6) Tina Marsh and Eddy Hobizal, Umlauf Sculpture Garden (Creative Opportunity Orchestra) Summer twilight, the open air, and the extraordinary voice of one of our most gifted, innovative vocalists. Abetted by jazz whiz Hobizal on piano, Marsh infused pop favorites and standards with such tenderness and ferocious passion, it made our ears weep.

8) Ann Hampton Callaway (Austin Cabaret Theatre) Romance, romance, romance, distilled into one gorgeous, impossibly supple voice. For her long-awaited return to town, this diva of the cabaret delivered a deeply intimate affair, rich with three-minute songs of love that she infused with the emotional complexity and heft of three-act plays. 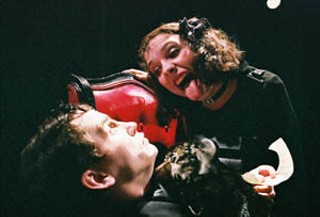 9) The Drawer Boy/Blue Surge (Hyde Park Theatre) HPT Artistic Director Ken Webster scored big with these two small comic dramas about tangled relationships that never quite go where the people in them want. Despite the study in contrasts storywise urban Surge concerned the blossoming romance between a Chicago vice detective and a massage parlor worker; rural Drawer followed a young actors intrusion into the lives of two Canadian bachelor farmers Webster found common ground in their wit, smarts, and rich characters, coaching splendid performances from all his actors, but especially Michael Stuart in a career turn as Drawers Angus, the genial farmer with no short-term memory.

10) In the Pocket (Tapestry Dance Company) A jazzy, joyful comeback from deaths door for both the multiform troupe (financially) and Artistic Director Acia Gray (physically), with every syncopated step, stamp, caper, and spin showing how happy these dancers were to be alive. As were we.