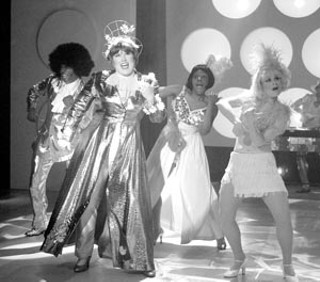 When family comes into Austin for the holidays, Zachary Scott Theatre Center is one place to experience the spirit of the season with sprinklings of both sugar and spice. This year's Rockin' Christmas Party is flashy fun, with an onslaught of seasonal classics as well as popular rock songs spanning decades. All the Scrooges and Grinches will have a hard time staying grumpy during this entertaining excursion. Silly and full of glitz, this homegrown original production has surprising and mainstay musical numbers, conducted by Allen Robertson, that aim to tickle those humbugs away.

On a funky retro-futuristic set designed by Michael Raiford, the active ensemble shakes and rattles the room. Willa Kaye Warren's wigs, from beehives to afros, and Raiford's outrageously gaudy outfits, along with some of the fastest costume changes around, keep the show rolling. Dave Steakley wears multiple hats as creator, director, and choreographer. His judicious eye for space and movement has performers grooving and dancing smoothly throughout the show. Jason Amato's lighting design is always complementing the action with vibrant colors and dizzying shapes that stir up the scenes.

The performers pose as themselves, Austin stage entertainers who have each received the same special gift from Santa: the chance to act out his or her own holiday TV special in the style of his or her favorite musical genre. We see Brian Coughlin impersonate Elvis in his final years (but not nearly as bawdily as Andra Mitrovich, who wears a vinyl dress adorned with a glittery cape and an enormous headpiece; her raspy voice and spunky attitude demand audience attention). Quincy Kuykendall's fast feet and rhythm shift the scene from velvet cheese to luscious dance party. A DJ and backup dancers enliven the stage with Seventies disco and Eighties pop, along with dancing in the mode of Prince, Madonna, and Janet Jackson. Judy Arnold's voice grabs and holds the ears as she belts out "Lady Marmalade" with dancers Robbie Ann Darby, Natalie Freeman, and Larissa Wolcott energizing and pumping the beat. In another fantasy, a country special, Rebecca Schoolar poses behind a giant ornamental wreath and sweetly sings "Blue Christmas" with a miniature cowboy hat strategically propped on her massive blonde wig. In a dazzling yet uncomplicated set change, audience members are transported inside the Apollo Theatre, where Arnold gives a touching rendition of "Bridge Over Troubled Water." She and Mitrovich then join forces in a soulful "Peace on Earth."

The final scene is, as expected, a big finale with a crew of kids as reindeer forming Santa's sleigh. Young Bryan Pacheco as Santa tap-dances against an even younger Bria Robinson as Rudolph in hip-hop style. By the end of the spectacle, and with encouragement from the cast, the audience is clapping and boogying with the performers onstage. From a live limbo competition to mistletoe kissing to a random spectator singled out as a forlorn lover, Rockin' Christmas involves the audience as participating guests at a party. With skill and humor, the gang at Zach provides an invitingly festive celebration that will appeal to grandmothers, distant cousins, children, and most anyone in between or beyond.