In the two years since Ann Hampton Callaway last appeared in Austin, the New York-based cabaret singer-songwriter has been on a fast track: packed concert schedule, tour of Europe, new show with her gifted sister Liz, tons of songwriting, Manhattan cabaret award for her CD Signature, new record label, and, not insignificantly, a new romance. But as eventful and fun as all this activity has been, there came a moment when the pace was too much. In search of a CD by one of her musical heroes, Carole King, Callaway went to the Virgin Records überstore in Times Square –- a mob scene on the best days but this day a mosh pit masquerading as a record store. Battling her way free only to be confronted with Broadway at its most breathless bustle, Callaway was seized with an urgent desire to ... slow ... the world ... down. That need for a break from the relentless pace, a respite, a refuge of calm and relaxation, became the impetus for her new CD, in which she slows ... things ... down. The result is a very personal work for Callaway, with more of her own songs, including one penned with Carole King, and more from her own heart. It's a grouping of ballads so intimate and romantic that couples could find it very stimulating mood music, what was known in the day as a make-out album.

But while "slow" may be Callaway's new credo (and her new CD's title), it doesn't mean she's any less lively in performance. On the contrary, she's adapted one of her signature concert bits – improvising a song from audience suggestions – into a more ambitious exercise – improvising a song based on an audience member's life – that proves her more alive than ever. She spoke to the Chronicle in anticipation of her third visit to town with Austin Cabaret Theatre.

Austin Chronicle: Im intrigued by this idea of this being your version of a make-out album. It got me wondering, What is the state of the make-out album in 2004? AHC: There aren't that many people making quote-unquote make-out albums, and I think in these crazy times we need more refuges. We need more musical oases, because the world just keeps spinning and getting more crazy, and I think it's essential to slow down from time to time and submerge yourself in something beautiful and something that helps you get in touch with your heart. Otherwise, it's very easy to become alienated from yourself and other people. One of the things that became apparent, the reason that I wanted to make the CD, is I recognize the need for that in my life. I think if it's happening in my life, it must be happening in other people's lives as well. AC: Were there particular albums that stand out as the make-out albums of your youth? AHC: Oh, my youth. Well, I'm too embarrassed to say my favorite make-out albums of my youth. I really don't want to go public on that. But my favorite adult make-out album is Shirley Horn's Here's to Life. Every song is so gorgeous and delicious and beautiful and soulful. I also love John Coltrane and Johnny Hartman. That's a great make-out album. I have very sophisticated make-out album tastes. Some people like boom-shaka-laka-laka, boom-boom. That's not my taste.

AC: Your tastes are much more classic and timeless than mine were.

AHC: Well, what was your favorite make-out album?

AC: John Klemmer's Touch. I don't know if anyone remembers John Klemmer anymore. He was a saxophone player in the Seventies. What was then kind of soft jazz. And every cut was slow and cozy, and you could put it on and know that the mood wasn't going to be broken for the next 40 minutes. Or 20 minutes, since in those days, you had to flip the album over.

AHC: Right, and 20 minutes about did it when you were an adolescent anyway. [Laughs] There should be an article about good make-out albums, because there aren't that many albums that do create that seamless mood.

AC: Did you know where you wanted to go with the album, what music you wanted? 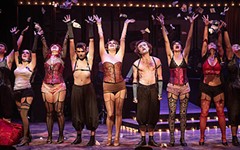 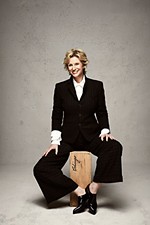 Sue's Turn
After years of thwarting the singing kids on Glee, Jane Lynch takes the stage to belt some tunes herself