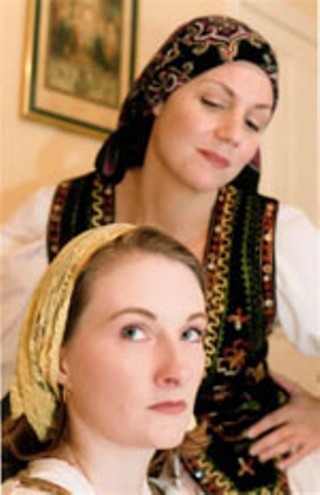 In late 19th-century Bulgaria, the patriarch of the Petkoff household is away in battle against the Serbian enemy, so mother, daughter, and servants tend the home. Soldiers fight outside on the street, and one night, while daughter Raina prepares for slumber, a rugged, starving, and exhausted Serbian soldier sneaks onto her balcony for refuge. Stunned and yet titillated, the young Raina coyly hides the enemy behind her bedroom curtain as mother and servant search for intruders. Thus, the formulaic comedy of realist drama ensues. Raina's extroverted and dashing fiancé, a heroic soldier fighting in the Bulgarian army, secretly lusts for the queen-in-peasant-dress servant, Louka. Social formalities and customary matchmaking forbid the betrothed pair from speaking utter sincerities. Swiss officer Captain Bluntschi, played charismatically by Jon Boatwright, catalyzes all characters into revealing their forbidden desires within a cultural landscape of class conditioning.

Now in its 23rd season, Different Stages brings Austin audiences George Bernard Shaw's Arms and the Man, and while the cast is capable of handling the Irish playwright's text, it lacks sharp direction. Karen Jambon's fingerprints as director are scattered. Oftentimes, actors appear to be arbitrarily standing onstage and speaking lines. Of course, they haven't much room to maneuver. The space at Austin Playhouse's Second Stage is small, and Adam Kluth's set occupies a majority of it. The upstage backdrop is a creamy blue wall with wooden shutters that rotates into an ivy-laden trellis. A bed, seating area, and bureau with appropriately aged props also fill the area. The furnishings look nice, and the tightly pinned actors negotiate them as best they can, but the result still appears two-dimensional, as if they were performing in a flat painting.

The lack of depth seeps through as peppered renderings of characters that hinder the script's wit and cunning dialogue. Jennifer Underwood and Norman Blumensaadt efficiently pose as wealthy Bulgarian parents – mother obsessed with daughter's marriage, father absentminded to the shenanigans in his home. Servant Louka is fiery and sly in Emily Erington's portrayal, but Jim Arnold, as her affianced partner, Nicola, eschews some opportune comedic moments. Jon Boatwright's mysterious Swiss officer smoothly transitions from beggar to aristocrat, although the lack of chemistry between him and Nikki Zook's Raina troubles the finale of the play when risk and revealed secrets need to be at the highest peak.

The program for the show provides pages of historical information, including an insult to Bulgarian tradition as was fashionable during Shaw's time, but the play's themes of class, national identity, and stubborn marriage mores would be better emphasized through clearer dramatic choices and intent in the performances. Different Stages' Arms and the Man is an honest attempt at entertainment with a political edge, but it swallows or ignores the complex interpretation that this script deserves.