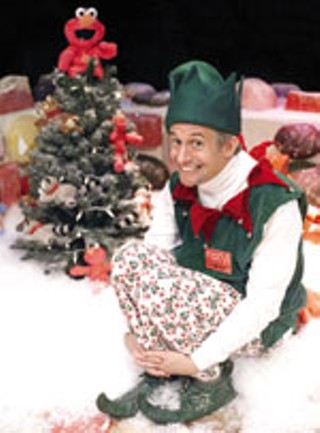 You know, as career moves go, turning elf isn't quite the embarrassment you might think. Certainly didn't hurt Will Ferrell's career. In fact, it took him from goofy supporting guy to headlining star. A pair of pointy ears made Orlando Bloom into a Middle-earth dream date for millions overnight. And while the curly-cap, slave-to-Santa bit was humiliating, David Sedaris was able to parlay it into a bitingly funny piece of writing, a colossally popular recorded adaptation on National Public Radio, and a career as one of the country's best-known and smartest satirists. Closer to home, it helped make Martin Burke one of Austin's most-recognized and best-loved stage actors.

So just because Rob Williams is donning that gay apparel with the starburst collar and the jingling bells, don't think it an act of desperation fueled by the disbanding of the Flaming Idiots. No, that comedic trio, of which Williams was one-third for the past 20-odd years, went out in a blaze of glory: record sellout crowds locally, cheering houses on Broadway. Williams is cheerfully getting all elfin as part of a gutsy career leap from comedian/variety act specialist to bona fide actor. He's taking over the role of narrator in the stage version of The Santaland Diaries that's become another Yuletide tradition at the Zachary Scott Theatre Center. Given that Martin Burke originated the part at Zach and played it for six successive sold-out seasons, he leaves some pretty big pointy little slippers to fill. But Williams comes to the job with his own substantial comic gifts honed by decades on the Renaissance festival and theatrical circuits, not to mention the support of a veteran production team, including performers Meredith McCall and Jason Connor and director Dave Steakley. The Chronicle spoke to Williams prior to this weekend's opening.

Austin Chronicle: Was the role a gift from Santa?

Rob Williams: [Laughs] Yeah. Santa Dave Steakley. Santa Martin, too, I guess. I mean, it's great for me to be able to go from one successful venture in Austin right into another successful venture in Austin. It's sort of a guaranteed success just because of how good Sedaris' work is and how good a job Martin has done all these years and how good a job Dave has done at keeping it a tight package that keeps people coming back. For me to be able to slip into it, well, it's a little weird. I feel a little like the second Darrin in Bewitched.

AC: Except this time they tell people who you are.

AC: So go back to the last Idiots show. You're on Broadway. "Top of the world, ma!" It was good?

RW: Great. And even in Austin, the last run we did here went so well that by the end of it we were breaking records. They added a show on Tuesday morning and by Tuesday night it was sold out. So every show was full, full, tons of enthusiasm, tons of love. At our very last show here, Mayor Will Wynn declared it Flaming Idiots Day, and Dave Steakley gave us all watches and made a nice speech. So we go from that to Broadway, with all the glory of that. It's a beautiful theatre, you're right in the middle of it all, the crowds were full. It's going out right on top. And that's exactly what we wanted. We wanted to go out when it had all that energy and love. Not stop it because it was starting to fail, not stop it because we hated it. Stop it just because we're ready for the next thing.

AC: But you didn't know what that next thing was. So you're coming back to Austin thinking what?

RW: You know, when the Idiots left the outdoor festival market, we knew we wanted to move the show into theatres, but it was still a leap of faith that we could pull it off. That's what it felt like doing this as well. When I was a young man, it was really exciting to practice juggling all day long and crack whips and escape from straitjackets and figure out tricks with my feet. And at some age, I just wasn't as excited about practicing those things, about keeping that skill up. What I'm loving is the comedy; I'm loving performing for a live audience, so I wanted to focus on the stuff that I still really loved. I just didn't know what shape it would take. I did some standup, and that went okay, but I seem to have a better skill at writing dialogue, and I like the collaborative effect of theatre. That's one of the nice things that I've been experiencing on this show. As I come in with new ideas, going, "Can I do this? Can I do that?" Dave and Meredith and Jason, instead of being "mmmm, nnnnah" or "Yeah, I guess that's funny, you can do that," they're falling out of their chairs laughing and going, "Yeah! Yeah! Yeah!" It's a supportive environment. You feel comfortable bringing ideas in or going out on limbs.

AC: Did Dave approach you about taking the role?

RW: A lot of what I did with the Idiots, I don't know if you could call it acting, but it was performance of a character, but I think I was a bit of an unknown quantity to Dave, actingwise. "Does he have the ability to be serious onstage? If he speaks in a serious tone, will people be able to take him seriously?" Well, I did one week of House Arrest [filling in for Martin Burke, which] showed Dave I had that. You could put me in front of an audience and call it a serious moment, and it would work. It was after that that he approached me for Santaland.

AC: How familiar were you with Sedaris' piece?

RW: You know, one of the pleasures of this for me is that I'm such a big fan of David Sedaris. I'd read his laundry list. I'd read anything he wrote. I think he's just that funny. I'll go see him anytime he's in town. I'll see him read at BookPeople and sit on the floor for two hours just waiting for him to get there. I'm the sort who listens to NPR and watches PBS, so I heard Santaland before I ever read it. Then I read it before I saw Martin do it. I've loved it every step of the way. I've loved everything Sedaris does, but I also loved this production. I think Martin did a killer job with it.

AC: Is there someplace where you feel a real kinship with Sedaris, humorwise?

RW: Where our humor intersects is a lightheartedness and a silliness with a bit of an edge to it. The old Warner Bros. cartoons had a little bit of that. Some of the adult cartoons have that, like the Adult Swim cartoons on Cartoon Network. South Park has that. The Simpsons has that. It's lighthearted, it's silly, then it'll say something that just makes you go, "Whoa! What did I just hear?" That's where my and Sedaris' humor overlap.

AC: Have you put on the costume?

RW: Just a little bit. It's funny, but it reminds me of the days that I worked in Renaissance festivals. There's a part in Santaland Diaries where he talks about [having to] take money [from Santaland to the Macy's office], but you can't change into your regular clothes. You have to take it dressed as an elf. He's like, it's one thing to be an elf in Santaland, it's a whole other thing to be an elf in menswear. That's how I felt doing Renaissance festivals. When you're in the environment, it's all right, but man, the times you had to go do a promotional event at the mall, oh God, you just feel so exposed. It felt like humiliation. It definitely reminds me of my days in tights and tunics.

AC: Do you have any expectations for what it's going to be like with an audience?

RW: Even though I've spent so much of my life performing for audiences, I've never had people laugh at these words. I've said these things a thousand times to dead silence or to a stage manager and a director who laughed, but to have 150 people laughing hard at this stuff, I need to be reminded, "That is funny, that is what I'm going for," and not let it throw me. But I've always loved comedy for that getting the laugh, knowing where to come in on the laugh, that play with the audience, the give and take and pacing of comedy. It really excites me.

Culture Flash!
New gifts to the Long Center, a new Little Elf for 'Santaland,' a new name for the AMOA Guild, a retirement at the symphony, and a return to Venice for Allison Orr