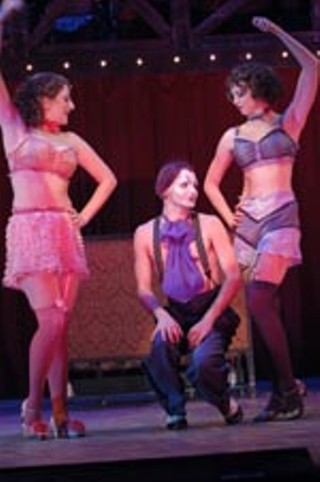 B. Iden Payne Theatre, through Nov. 14

The musical Cabaret feels creepily pertinent in the current presentation by the UT Department of Theatre & Dance. Rhetoric and hope intermingle in an escapist world set on the cusp of German fascism circa 1930. "So life is disappointing? In here life is beautiful!" says the Emcee of Berlin's Kit Kat Klub, where hedonism and sexual deviance run rampant. As the audience gets seated in the Payne theatre auditorium, waiters on stage prepare tables and chairs for another business day at the Klub. Customers enter chattering, and the orchestra warms up while we all wait for the show to "begin." The Emcee creeps out to sing "Wilkommen," and thus it starts with eerie solemnity.

Director and Chronicle arts writer Robi Polgar finely tunes this production by layering choices with complex ambiguities. During a scene change, a waiter drops a prop, seemingly by accident. But no! Everyone stops. He sheepishly gazes at the audience, and, as a sort of apology, sings "Tomorrow Belongs to Me," Kander and Ebb's evocation of a German folk song stolen by the Nazis as patriotic melody. Subtleties sprinkled everywhere, like cabaret tables always occupied in darkness, make this particular production of a popular musical unique.

Dancers grant cheap thrills as they skirt about in underwear and lacy bloomers. Costume designer Blair Hurry clothes the Kit Kat cast with panache, including the Emcee, whose purple suit shines slickly under the lights. Choreographer Rachel Murray arranges dance sequences with punch and sultriness as dancers split legs, thrust hips, bounce chests, and gesture so provocatively as to cause blushing. (During one bit, each dancer places a hand over her crotch, then takes a whiff of her fingers.) Even so, the dancers could have been tighter in their execution, loosening up their bodies without sacrificing crispiness.

Beyond the Klub, performances are less than consistent. Josh Mullens as the naive American writer Cliff Bradshaw and Chase Bringardner as his German friend Ernst Ludwig both carry their intentions and manner effectively, but Bringardner's accent wavers, as does Mullens' pitch when he sings. The dazzling Sally Bowles, played by April Perez, sparkles brightly during solo numbers but flickers during conversation. The good outweighs the mediocre in Dustin Hunter Wills' smooth, controlled Emcee, who is appropriately flamboyant and absurd in body language and voice. Kendra Treichler's Fraulein Schneider and Jordan T. Maxwell's Herr Schultz flirt splendidly as old-timers developing a sweet love affair. Treichler focuses well while Maxwell jubilantly embraces life before loss comes.

It is becoming popular among some groups to compare the political situation in Germany before World War II to that in the U.S. today. Jews were forcibly distanced from national "morals" by the coercive Reich (Right); German citizens chose to forego humanity for homogeneity. At the cabaret, people forget their troubles, but once visitors bear swastika armbands, the atmosphere goes from glimmering to dark. Polgar's final sequence transforms the set into an amalgam of gas chamber, train, prison camp, and ghetto as performers wearing yellow stars drop their luggage center stage. The once colorful Emcee appears emaciated, draped in gray stripes. Storm troopers on multiple levels aim rifles at the huddled group below; a drum rolls; lights black out. The party is over. Despite some minor awkwardness in actor choices, UT's Cabaret is a risky departmental production sufficiently primed as postelection catharsis.