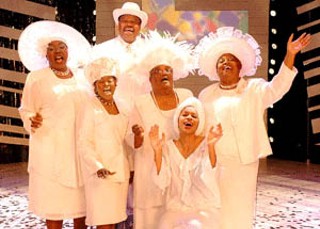 When the women onstage refer to their Sunday-go-to-meetin' hats as crowns, you can see why, and it isn't simply that they're extravagant, designed to fulfill the biblical injunction to women to cover their heads and adorn themselves. These headpieces may be the colors of jewels or festooned with ribbons, flowers, or feathers, but what makes them crowns is the way they transform their wearers into queens. For generations of black women, these hats have been a source of pride and achievement. No matter what station they held in life, no matter what indignities they suffered during the week, church on Sunday was a place where they could hold their heads high, and by heaven, they chose to do so with something magnificent atop those heads.

Crowns sings a joyous hosanna to this African-American tradition, with a quartet of older women inducting a younger woman – and us – into the mysteries and rituals of the church hat. Stories are shared, rules laid down, and songs sung – glorious gospel numbers that carry us into the white clapboard churches in which so many of these women worshipped (and which is suggested sublimely by Michael Raiford's set of diagonal white slats).

For the Zachary Scott Theatre Center production, director Dave Steakley has assembled a cast of women for whom the church hat is a living tradition. In their bearing and delivery, you can see these four have logged their time in the pew, behind and even under many a hat. Wearing the show's crowns – splendid works of finery and fancy crafted by Michael McDonald and Leslie Bonnell – they are regal, displaying the poise and pride of royals. And they lay down the commandments of the tradition "Thou shalt not touch the hat," "Thou shalt not knock the hat" – with the authority of monarchs, if not Jehovah himself. Even when Janis Stinson is in the most outlandish of hats – something like a sequined emu nesting on her head – she carries herself like Elizabeth at coronation. And she is not mocked.

Even more than this attitude – "hattitude" as the script has it – the performers reveal their connection to tradition in their singing. They deliver more than a dozen gospel standards with a faith and power that charges the soul. "Ain't That Good News" pours out of Willie Gene Denmon like water from a baptismal fount, pure and holy. Judy Arnold raises the roof (and very nearly old Lazarus himself) when she sings "Mary, Don't You Weep." Jacqui Cross makes "His Eye Is on the Sparrow" into a commanding anthem of both belief and liberation. Crowns doesn't spend much time discussing civil rights or slavery, but when Cross belts out "I sing because I'm free," it seems to come from the heart of the African-American experience and an emancipation dearly purchased after generations in chains.

On the stage, Crowns does betray its origins as a coffeetable book. (Photographer Michael Cunningham and writer Craig Marberry developed the original Crowns: Portraits of Black Women in Church Hats.) Playwright Regina Taylor provides a dramatic spine – a teenager from Brooklyn is sent to live with her grandmother in South Carolina after her brother is murdered – but the bulk of the script is devoted to anecdotes and commentary about church hats. Relatively little is devoted to expanding upon the girl's situation and how she comes to accept this foreign world of her grandmother, though that doesn't stop Kia Dawn Fulton in this production from giving the part her all, initially projecting teenaged defensiveness and defiance at this backwater society, then making peace with it in transcendent song.

Ultimately, however, the presence or absence of a plot makes no difference here. Crowns is a hymn to a tradition, a joyful song of praise to a custom and a people and the deepest part of ourselves. It is a testament to crowns on earth and in heaven. Hallelujah to that, and amen.