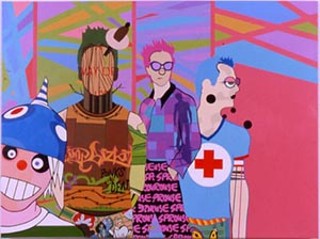 Arthouse at the Jones Center, through Oct. 24

Here's the good news about "Comic Release: Negotiating Identity for a New Generation," the touring exhibit curated by Vicky A. Clark and Barbara Bloemink: It's well worth seeing. It's well worth seeing if you like to give your eyes a treat or you like to give your mind's teeth something complex to chew on or you appreciate the vernacular of comic books and graffiti or even if you don't. If you're familiar with the surreal work of cartoonist Glen Baxter, say, then you might feel a slight tingle to be looking at a large original of his; if not, you may still be delighted by his The English have always adopted a relaxed attitude to sexual fulfillment at the end of one hall. If you fondly recall the Gottfried Helnwein self-portrait used as the cover of a Scorpions album, then you'll likely enjoy the Disney-dropping message of the artist's mixed media work American Prayer, and you'll probably even forgive the misspelling of his name on the nearby title card. After all, what evocation of comic-book history would be complete without a typo or two, and who's got time to read text, anyway, when there are such vibrantly graphic treasures as Michael Ray Charles' painting (Forever Free) Beware and the Reed Anderson/Daniel Davidson video "Macho Shogun" to enjoy looking at?

There's much to enjoy here, from the colorful mushroomy phantasms of Takashi Murakami to the sculptural collection of individually painted glass bottles by famed tagger Barry McGee, from the New Yorker-ish miniature portraits by Juliette Borda to Peregrine Honig's Gorey-tinted Awfulbet as rendered in ink and watercolor on 26 separate brown lunch bags. (You especially want to walk around to Arthouse's streetside display window, where Miguel Rodriguez's life-sized busts, Considering Informative Action, will give you a deeper appreciation of both superheroes and the potential of fired clay.)

A smattering of the pieces in "Comic Release" seem little more than images that are fun to look at, and there's nothing hella wrong with that. The few innocuous creations are a welcome balm, in fact, as much of this show works the sociopolitical plow for all it's worth, using the sharpness of popular comic-book icons and design methods to dig up fresh perspectives on gender, race, class, and all the rest of the ground our lives are necessarily seeded, if not ceded, in.

This exhibit's worth, I told you at the beginning, is the good news. The bad news is evident only in the wide world beyond the gallery, where the human race continues doing to itself and its surroundings the sort of things that fictional – whether visual or textual – tragedies and farces are created from. The only bad news is what some of the artists of "Comic Release" are expertly commenting on.