When it comes to Lone Star art, Rebecca Cohen wrote the book (finally!)

Sometimes if you want something done, you just have to do it yourself: Sew on a button, clean the gutters, write a comprehensive guide to all the art museums and galleries in Texas. Now, that last need might not bother most folks, but it sure nagged at Rebecca S. Cohen. The self-described recovering art dealer (RS Levy Gallery) and onetime Chronicle visual arts maven spent years seeking a handy little volume that would contain all the who, what, when, where, and whys of Lone Star visual arts venues, but her search was always in vain.

"There was no single listing source that said, 'these are the art museums in Dallas or Houston even,' much less Albany or San Angelo," says Cohen. "I kept looking for an efficient way of plotting a trip around Texas, and there didn't seem to be any, so I thought, 'I'll do it.' My theory is that if you do what you really love to do and you do it as well as you can, somebody else is bound to be interested." Sure enough, somebody else was interested, and most opportunely for Cohen, she happened to be an editor at UT Press. Theresa May approved the project, which is why we now have Art Guide Texas (464 pp., $24.95 soft), a handy little volume that provides the lowdown on 130 museums, galleries, art centers, and alternative spaces across the Lone Star State, from Abilene's Center for Contemporary Arts to McAllen's International Museum of Art and Science. Every entry contains all the essential practical info – address, phone number, days and hours of operation, cost – and most include an account of the institution's history and mission, gathered firsthand by the author.

"I wanted to see every place myself," Cohen says. "I wanted to be able to say, 'This is what it felt like to go in here. This is what the building looked like.' And that was the fun of it, too, going and meeting the director or the curator or somebody. And as I talked to directors and curators around the state, I realized that most of them don't get around much. There are two or three other people in the state maybe who have been to all these places, because people in the business don't get time to travel around. So this gives more information than where to find it and the fact that it's there. It talks a little bit about the history and the exhibition policy, which I think is useful for museum people, useful for artists, useful for real people.

"The point was to give people as much information as they could have so they could feel comfortable making the decisions [to go or not go to these places] on their own. If I had gone in and said, 'I don't like this kind of art, so don't go there,' that doesn't seem reasonable. On the other hand, smaller museums in smaller communities tend not to have the masterpieces that you might find in the Louvre or even the Museum of Fine Arts in Houston, but they serve a function and a purpose, and I tried to explain what that is and how they do it and talk about their exhibitions, what kind of work they bring in, and other ways they serve their community. Almost every single one of them has a school, teaches classes, does something, because all of them see that as a really important component of what they do. And in Texas it's something that museums have to do, because very often the state doesn't do it, local schools don't do it."

Cohen's already extensive and intimate knowledge of the state's arts scene made her an exceptional candidate for penning a guide to it. Still, the project proved as much of an education for her as she hopes it will be for its readers. "There were lots of places that I had never been and might never have gone if I hadn't done this guidebook," she admits. "I'm not sure what would have taken me to Albany, Texas, or Abilene, for that matter – or Lubbock or Amarillo or Orange or Laredo – looking for an art museum. I pushed a lot further and was surprised and happy to find a lot of the things I found. The Nave in Victoria. The museum in Beeville. The Old Jail Arts Center in Albany always comes to mind because it's in a town of 2,000 people, and they have a 19th-century jailhouse that's had two different additions, has contemporary spaces, does a broad range of shows, and people from the town support this place. It's just wonderful. It's what art is supposed too be about, that kind of exchange.

"I was never a big Western art fan before I started this trek, but I went to the Richardson Collection in Fort Worth and visited with the director, who took me through and talked about the works there. By the time she was finished, I was seeing Remington nocturnes in a whole new way. I was seeing different kinds of work that I didn't normally look at and taking the time to become acquainted – and become quite fond of – things that I hadn't thought about before. All of it was an adventure."

Along the way, Cohen even learned some things that didn't have anything to do with art, for instance, "that you can get snowed in in Midland in November. And that your tires really don't melt in June in South Texas – I was convinced they were gonna. I've learned that I can handle six hours in a car in one day, and that's it. Any more than that and I'm dead." 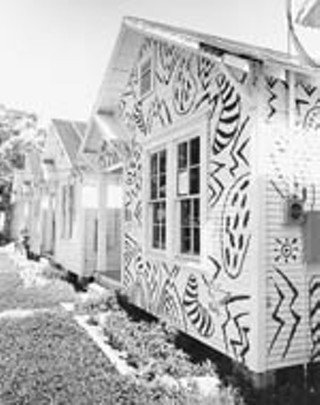 That last lesson Cohen learned the hard way, logging thousand of road miles criss-crossing the state over many, many months – more than twice as many as she initially expected. "It took a lot longer than I thought," the author winces. "This state is a lot bigger than I thought."

The guide eventually consumed five years of her life. "In the time that I've been doing this," she says, "my husband and I have moved three times, I've had four different offices, my oldest child has gotten married and, a year later, she made me a grandmother."

The time saw changes not only in Cohen's own life but the lives of the institutions she was cataloging: "In the five years that I worked on this, several museums appeared in finished form that weren't there when I started. Some that were supposed to be finished fell apart. Some are still out there waiting to be completed. There's a Western museum in Kerrville that's had three directors and three names since I started writing, and I will tell you that the current name [in the guide] is not accurate, but it's the best I could do. It's a changeable business."

What hasn't changed – and in Cohen's view, won't change – is the value and significance of the Lone Star art scene. "There are amazing resources [in Texas], and they're underpromoted and underrecognized. People don't know what they have, and they should. I can't tell you how many times I've gone to New York to see exhibitions at the Modern or the Met and the exhibition was shown in Texas first or was coming here. It's happened a number of times that I've gone to the Modern to see an artist's work in a group show, and it was somebody I saw first at ArtPace in San Antonio. I was at the Metropolitan last year for the Chuck Close print show, which was organized by Terrie Sultan of the Blaffer Gallery in Houston. There were lines around the block for the Modigliani show at the Jewish Museum in New York. Saw it at the Kimbell. The Nasher Collection, which is new, has one of the finest collections of modern sculpture in the world. The Chinati Foundation in Marfa is hardly unknown in the grand international art community, although locally I think a lot of people don't know that out there in the middle of West Texas is this incredibly important place. If you never left the state and could only see the art that was here – which would be sad – you could still stay very current about what's happening in contemporary art and see wonderful historical things, works that pass through and objects that belong to museums here. There are amazing resources here."

Now, art lovers finally have a guide to all those resources between the covers of one book – making it perhaps the latest amazing resource in Texas art. But in the author's eyes, it won't be any kind of resource unless it's out on the road. "It was never meant to be on the coffee table. It was meant to go with you," Cohen says. And what do you know? It's small enough to fit in the glove compartment. So what are you waiting for?

Rebecca S. Cohen will moderate the Texas Book Festival panel In the Eye of the Beholder: Texas Art Collections on Saturday, Oct. 30, 3pm, in the Texas Spirit Theater of the Bob Bullock Texas State History Museum.

Cohen will sign copies of Art Guide Texas at ArtPace in San Antonio on Thursday, Nov. 4.