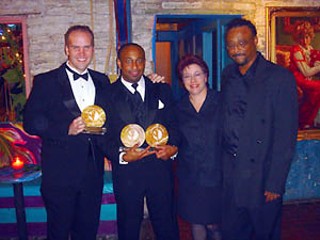 On Monday, Sept. 27, the Austin Circle of Theaters handed out its annual B. Iden Payne Awards, honoring outstanding achievements in local theatre from August 2003 through July 2004. The ceremony, marking ACoT's 30th anniversary, was held at the home of Esther's Follies, an Austin theatrical institution that also got its start in the Seventies just a few years after the Circle. After a few years of recovery from his first stint as emcee, Lowell Bartholomee returned to host the affair, while Stuart Moulton and a bevy of beauty queens from the Naughty Austin production of Pageant presented the awards and kept the show moving at a record pace. (Less than two hours for the whole show? Get those folks for the Oscars!) As for the awards themselves: The most honored show was Sam Bass Community Theatre's Forever Plaid, which received four awards, including nods to Dennis Whitehead for both his direction and musical direction. Austin Playhouse was the big winner in the comedy category, going four for four in acting awards. With one more award for Michael Stuart's musical turn in its production of Kiss Me Kate, Austin Playhouse matched the five acting awards taken home by the Zachary Scott Theatre Center: three in musical productions and a pair for its version of Who's Afraid of Virginia Woolf? The State Theater Company's spooky staging of The Woman in Black snagged three awards in the technical category. Pro Arts Collective founder and longtime actor, director, educator, and arts activist Boyd Vance was given the annual Special Recognition Award for Outstanding Achievement in Austin Theatre, and the Payne Awards Nominations Committee also dispensed special certificates to K.C. Gussler for his direction of the all-youth casts of Guys and Dolls and Joseph and the Amazing Technicolor Dreamcoat, Physical Plant Theatre for its site-specific work on The Fever, and Rubber Repertory Company for Mister Z Loves Company as an outstanding late-night adventure. Here is the full list of winners.

Roderick Sanford (It Ain't Nothin' but the Blues)

Ev Lunning Jr. (A Flea in Her Ear)

Christopher McCollum (The Woman in Black)

Richard Winkler (The Woman in Black)

The Gunn Brothers (The Woman in Black)

Susan Branch (It Ain't Nothin' but the Blues)

K.C. Gussler for Guys and Dolls and Joseph and the Amazing Technicolor Dreamcoat

Physical Plant Theatre for The Fever