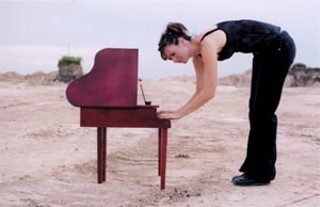 There is no shortage of irony when it comes to John Cage. He was widely disparaged for his music of nonmusical sounds composed by using astronomical atlases and the I Ching, but three years after his death in 1992, and despite his well-known skepticism toward phonographic reproductions of music, he became the most recorded American composer. He was shunned by the musical establishment and rarely welcomed to share musical programs with Mozart, Brahms, or even the acknowledged 20th-century masters, but the annual John Cage birthday concert, hosted by pianist Michelle Schumann, is perhaps the biggest new music event in Austin.

Schumann has been a Cage fan since a music composition professor asked her to play Cage's Mysterious Adventure on a concert at the University of Calgary. "I was in the new music ensemble there in my freshman year," she recalls, "and he thought it would be a cool idea to put a prepared piano piece on a concert." The prepared piano is Cage's most lasting and endearing musical innovation. By wedging pieces of rubber, metal, and odd, small pieces of hardware between the strings, each note played on the piano gets its own voice, rather than being relegated to a tonal point in the traditional, connect-the-dots melody.

While for some, the notion of interfering with the lyric quality of a majestic Steinway is like painting a moustache on the Mona Lisa, the sound of Cage's dozen or so prepared piano pieces has an infectious charm – certainly, Mysterious Adventure had that for Schumann and her audience.

"It was a fantastic and energetic piece, full of African rhythms," she says. "I had a ton of fun with it, but the thing that was most influential on me was that the audience just went nuts. I thought people might enjoy it, but people were shouting and hollering. It was a huge success. I decided this was something I wanted to do."

Although the prepared piano pieces have an immediate appeal, many of Cage's detractors don't get past the gargoyle at Cage's castle that is more talked about than performed, his infamous 4'33", which involves a musician restraining himself from sounding a note for four minutes and 33 seconds. With that work, he was dismissed as the inventor of the musical equivalent of the pet rock, my kid could do that, he can't be serious, the emperor has no clothes, and he would never have been seriously considered for the Pulitzer Prize.

Schumann says the work is about getting people to listen more actively. "4'33" allows people to understand one part of what he did," Schumann says. "He was paying attention to the sounds and to the music around him."

Schumann's encounters with Cage have drawn her attention to the tonal decay after the hammer strikes the string – that point when the pianist must pass control of the sound to the resonating properties of the instrument and of the room. She says that "when people are listening to music, they are listening to the music at that moment but not to how the music resonates after that moment; it is those moments that take you into a different world. Even at the end of a standard symphony, on that last note people are up and clapping without listening to that halo of sound, and they may miss that glorious sound if they are not reminded of what is there."

Despite the wild response to her Cage debut in Calgary, Schumann was surprised with the enthusiasm for her 2001 doctoral lecture demonstration featuring piano works of Cage. "What was amazing was not only the response from the audience, but the response from dissertation committee was fantastic, too, not just for the novelty but the true sense of what Cage was after. They were familiar with the notion of Cage as the inventor and avant-garde composer, but not Cage as the craftsman and as a really profound musician."

That concert was so successful that Schumann has made it an annual event, celebrating the composer's birthday in the same way that chamber groups celebrate Mozart's birthday in January: with a concert and cake.

For the fourth annual Happy Birthday, Mr. Cage! celebration (he would have been 92 this year), Schumann has programmed Cage's Aria, to be sung by her fellow University of Mary Hardin-Baylor faculty member Lisa Clement. Percussionists Tom Burritt, Thad Anderson, and Jake Thieben will join Schumann for Amores, Second Construction (in metal), and Living Room Music. Members of the audience will roll dice to determine the program's order.

Schumann will also introduce her audiences to Cage's music for toy piano, an instrument that has become harder to find since the advent of electronic keyboards. When they were looking for a suitable instrument, her husband, Matt Orem, came across the Schoenhut Toy Piano Company, which has been making toy pianos since 1872. "I told them that I was with Barbwire and that I wanted to use the instrument in a concert of music by John Cage," Schumann says. "They looked up our Web site (www.barbwire.org) and responded by saying they would like to donate one." She chose a mahogany grand that matches her 1917 mahogany Steinway grand: "It is kind of the 'Mini-Me.'"

Schumann will play the Suite for Toy Piano, which Cage wrote in 1948 for his longtime partner Merce Cunningham when the two were at Black Mountain College in North Carolina working with folks like Buckminster Fuller, Robert Rauschenberg, and Charles Olson. While this work retains a certain daintiness, his Music for Amplified Toy Pianos from 1960 reflects Cage's increased interest in the role of chance. "It is completely chance-oriented and completely aleatoric and completely insane," says Schumann. "Definitely this is one of these works where the audience will be asked to listen to all of the sounds after the attacks. It will be interesting to do a traditional work and a very avant-garde work – using the same medium and showing it in different ways."

A toy piano on a concert? How could anyone take Cage seriously?

"I don't mean to get too deep about it," Schumann responds, "but I want to make it evident that Cage had this childlike naïveté and curiosity that was really fantastic and joyful and that he paired that with an immense craftsmanship and an understanding of rhythm that was phenomenally sophisticated. It was really very unique, because oftentimes in the academy we lose something. As we gain craft, naïveté is replaced by sophistication."

Her long acquaintance with the music of John Cage has informed her playing of Chopin and Rachmaninoff, and vice versa. "There is no question that it has completely changed the way I listen not just to music and to myself. It has really changed the way I approach music in general."

That balance serves her well. In 2002 she became professor and artist-in-residence at the University of Mary Hardin-Baylor, and this spring she was a semifinalist in the 27th annual Eckhardt-Gramatté piano competition in Canada.

For Schumann, the trick is letting curiosity and technique work and play together. "I can't divorce myself from my education; everything I have done before helps me play Cage. I don't separate the two – that is an important point. My idea is that if I am not going to listen to it, why would anyone else?"