Clowns picket Physical Plant, Mills takes the prize in Montreal, Steakley mixes up some 'Tuna' in Louisville, and Salvage Vanguard wants you to join their party 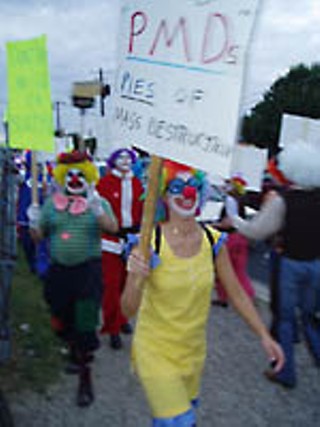 A flash mob of clowns? That's Carlos Treviño's story, and he's sticking to it. The co-creator (with Steve Moore) of the current Physical Plant Theater show Not Clown reports that just before last Saturday night's performance, approximately 30 folks in full greasepaint and fright wigs showed up outside the Off Center and began waving picket signs and chanting slogans along the lines of "Clown Power!" and "Clowns are people, too!" Treviño claims to have "no idea" who they were and that "they disappeared into their clown bus before we could ask," but someone conveniently had a camera on hand to capture the event. Coincidentally, this is the final week for Not Clown, with performances Thursday-Saturday, 8pm, and an extra show has been added Friday at 11pm. For reservations, call 275-6069.

What Austin artistic director is set to mount an Austin-born play 850 miles from Austin? That would be Zachary Scott Theatre Center's Dave Steakley, who will spend October in Louisville, Ky., staging A Tuna Christmas for Actors Theatre of Louisville. Steakley is good friends with ATL Executive Director Marc Masterson, who previously imported Allen Robertson's original musical Jouét for a run at his playhouse. Now he's importing Steakley to give the theatre's Christmas cash cow – this will be the ninth year Tuna's been served at ATL – an infusion of fresh creativity, direct from the Lone Star State. The production runs Nov. 5-Jan. 2.

Joining the Labor Party doesn't always mean slogging through turgid debates about economic imperatives. When it comes to Salvage Vanguard Theater, it means a cash bar, silent auction, and sneak peeks at such envelope-pushing new dramatic work as C. Denby Swanson's The Death of a Cat and Graham Reynolds' opera Genghis Khan. It's just what it says: a party, but with the aim of raising funds to pay the artists creating SVT's upcoming productions. Join the fun on Sat., Aug. 28, 7:30pm, at ALLGO, 701 Tillery. There's no cover charge; just donate as you wish! For more information, call 474-SVT-6.