L.B. Deyo and Buzz Moran's Dionysium puts the fun back in cogitation 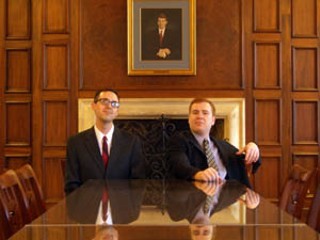 When Graham Reynolds furrows his brow, now that's a furrowed brow. When Graham Reynolds gets his frown on, it's not like the frown of just any mortal. With his long dark hair and long pale face, Reynolds, when he's got a frown redefining his handsome, distinctive features, seems more like some ancient Norse god with a grudge, some dire Celtic druid with an agenda of revenge.

But Reynolds isn't frowning now, here at the Dionysium. In fact, he's smiling. He's improvising a complex tune on his keyboard by way of introducing the evening's next speaker, he's giving a slight nod to L.B. Deyo and Buzz Moran in the far corner of the room, and he's smiling.

Most of the 30-plus people in the audience this night, hell, they're smiling, too. It's that kind of a thing, the Dionysium: It gets you smiling. Although it can also get you – not in anger but in intricate thought – furrowing your brow a bit, too.

"My big goal with the Dionysium," says Deyo, "is to get a little smarter." Deyo, already pretty damned smart, is the man who started the Dionysium in New York City four years ago. Except that, there, it was called the Athenaeum. "Our collective goal, though, is to increase Austinites' access to intellectual, cultural, artistic, and literary presentations. And to provide a forum for them to participate actively in that. To provide a salonlike atmosphere where they can share their own ideas and respond to the ideas of featured speakers."

Which is not, of course, a new concept. It wasn't a new concept even when the ruins that this year's Olympic tourists are traipsing around in were a thriving urban complex. And usually, the more contemporary salonlike things are slipshod affairs and about as exciting as last season's issue of Industrial Drywall Tips 'n' Hints.

But look at the smile on Graham Reynolds' face. Check the anticipation of the audience as local actor Taylor Maddux takes the stage to provide some historical context for what will follow: Shannon McCormick declaiming Winston Churchill's famous "Blood, Toil, Tears, and Sweat" speech. These people – on the stage or watching the stage – are not making grocery lists in their heads and wishing they were somewhere else with a remote control, say, in their hands.

And when Maddux completes his brief introduction, and McCormick has performed a rousing interpretation of Churchill's call to arms, and the musician Chris Black steps up to unleash a tight series of gypsy improvisations on his excellent violin, the audience is right there. The audience, as Black whacks the devil into his fiddlestick, is just about grooving.

"Thank you, Mr. Black," says Buzz Moran as the fiddler steps down. Moran is the co-producer of the Dionysium, because he and L.B. Deyo go way back. Before Deyo started NYC's Athenaeum and originated Jinx magazine online and garnered praise in The New York Times for Invisible Frontier – his book about urban exploration – he was one of Moran's closest cronies. And before Moran started his Shamrock Records label and published the underground foodie zine Hey, Hey, Buffet! and created the filmic hilarity that is Foleyvision at the Alamo Drafthouse, he and Deyo were thick as thieves.

"For one thing," says Moran, "we co-produced the Golden Arm Trio's first CD."

And so it's back to Reynolds again, who, as part of his role as the Dionysium's music director, is providing a sonic interlude before Dan Dietz and Chad Nichols come up to perform the ghost scene from Shakespeare's Hamlet.

But let's not forget the debate.

"The debate is the cornerstone of each Dionysium," says Deyo, back in Austin to escape the financial and operational stress of life in the Big Apple. "We want debates that aren't the typical high-school topics that everyone does: evolution vs. creationism, abortion, and so on. We want topics that we haven't already heard ourselves."

"Debates that have almost an entertainment value," says Moran.

"Everything has to be fun and entertaining to some extent," says Deyo, "or else we've failed. Because this isn't school. This is an evening on the town for people."

The debate that kicked off this particular Dionysium, staged in the bright premises of Iron Gate Studios, was "Resolved: That for the sake of humanity, robot research must end." It was argued formally, over about 15 minutes, by computer programmer Bill Jarrold (affirmative) and cartoon animator Lance Myers (negative), each of whom approached the conflict with a sort of cranial Krav Maga intensity. (It should perhaps be noted that, according to audience judgment, Myers kicked Jarrold's metaphoric ass halfway to Asimov City.)

And now Dietz and Nichols, having expertly embodied the Melancholy Dane and His Spectral Dad, return to their seats amid much applause. And, following a gorgeous keyboard improvisation by Maestro Reynolds, it's time to wrap up this night of edification with ... a drinking song. A drinking song sing-along, to be precise, in which the audience is invited – exhorted, really – to join in on the chorus. This time it's the Irish folk classic "Whiskey in the Jar," led by Deyo and Moran and special guest Greg Beets, and it's a galvanizing, liquor-fueled, many-voiced success. After which the audience is encouraged to mingle with the performers, to stay and drink and discuss all they've experienced on this first Wednesday of the month. And mingle they do, and the rivers of conversation flow even more brightly than the vodka and the wine.

But what's next for this Dionysium, this newly sponsored project of Austin's Salvage Vanguard Theater?

"Next month's debate topic," says Moran, "is 'Resolved: NASA should not be privatized.' [Full disclosure: This reporter has been invited to present the negative position.] Aside from that, it's still pretty much up in the air. We'll have a lecture, of course, and possibly another dramatic scene. And Graham's gonna do one of his brilliant improvisations."

"We have plenty of drinking songs," says Moran. "We have a whole book of them."

And the audience will be sufficiently large and willing?

"This is the fourth Dionysium coming up," says Deyo, "and each time the attendance has increased."

"That's because we've had worthwhile presenters," says Moran, "and because people feel comfortable staying on afterwards and carrying on discussions and just meeting other people."

"Now all we have to do," says Moran, "is figure out where we're gonna hold the next one."

Wherever it is – and we'll let you know as soon as we can, dear reader – you can be sure that it'll be a night of diverse intellectual pleasures. You can also be sure that Deyo and Moran will be there, holding forth and guiding the events, and that a certain Graham Reynolds will be in evidence as well. And probably smiling.