Topping Out the Blanton

That tree on the roof? Means the new museum is A-OK. 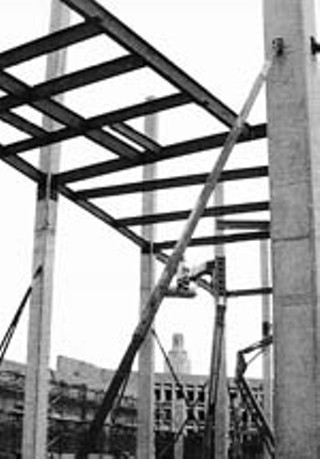 With so much construction in Austin over the past two decades, it's difficult not to notice that, at a certain point, every new building has a tree and an American flag on top, as if the building is celebrating two holidays at once. If you've traveled along MLK in the last 24 hours or so, you may have noticed that the new structure going up across from the Bob Bullock Texas State History Museum has a tree and a flag capping it off as well.

That is, of course, the future home of the Jack S. Blanton Museum of Art, long recognized as one of the foremost university museums in the country despite being kind of stuck in a corner of the art building. In October 2002, UT broke ground for a new Blanton at Speedway and MLK, and this past Wednesday construction workers put the highest structural element in place on what will be the 105,000-square-foot gallery building. "'Topping out' is a centuries-old tradition," says Sheree Scarborough, public affairs coordinator for the Blanton. "Ironworkers have been in the process of placing the steel beams 40 feet up in the air, and before they place the final beam, they all sign it, then put it up and place a flag and an evergreen tree on it. The tree has been traced back to Scandinavians, to the Vikings, and it symbolizes a job well done and promotes good luck for a building's inhabitants. The American flag was added by Norwegian ironworkers, who wanted to put their own twist in the tradition."

It's really just a sign that everything is coming along quite nicely. So the next time you're cruising MLK, take a glance up and join the celebration at the Blanton, where it's now Christmas every day.

And if you're still aching for an early gander at the finished facility, mosey over to the Art Building, where you can see "The Blanton Builds: Your New Museum." This exhibition of architectural renderings and plans for the gallery building; annex with museum shop, cafe, and administrative offices; and 72,000-square-foot public plaza/garden linking them, as well as photographs of construction, should sate your craving for the finished product until it opens in February 2006. Another anticipatory note: This show, and the two running concurrently with it – "Twister: Moving Through Color, 1965-75" and "500 Years of Prints and Drawings" – will be the last exhibitions from the Blanton before the new building opens. They run through May 22, 2005. For more information, call 471-7324 or visit www.blantonmuseum.org. 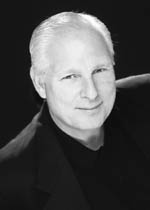