Stitching Up a Storm

Hope Perkins rocks like a Flying V. Style blends with art when Perkins uses fashion as a means for describing culture. Her jackets are too funny to secrete away in a closet; they stand up just fine on the gallery wall. There are sloppy paint-pen figures, sometimes all aglitter, but it's their radicalism and humor that make the jackets great, not their execution. Perkins has a piece on her Web site, www.hotpinkpistol.com, called Eazy Sailing, with an image of rapper Eazy-E in bold silhouette over a found print of a sailboat. I discovered she has a whole rappers/found-background series, which cemented my affection for this artist.

In the Camp Fig exhibition "Pins & Needles," Perkins presents a personalized vision of glamour. One particularly glittery coat-of-arms depicts an apple, a stag, and a pink-robed wizard presented as club threads for the Dungeons & Dragons aficionado. Next, sexy Selena in leopard-skin halter-top makes the perfect statement for the plus-sized salsa dancer. Robert Palmer gazes out irresistibly between paint-by-number lines. No topic or joke goes untried in this rock & roll- and roller-derby-inspired series.

Jenny Hart, who's also in the show, is wonderful as always. She whips up three sets of big brown eyes in the wall hangings shown. Blue Lass is totally pirate. It shows a cool sailor chick with garters and little gloves playing a fiddle to a bird that is singing to her. She's hovering in the ocean and has lots and lots of accessories to make her happy. I've been wanting to interview Jenny Hart for a while, so this was my big chance.

Austin Chronicle: I like pirates, anything with pirates; it's pure, clean fantasy. Why is fantasy so glamorous?

Jenny Hart: Oh, because you can never achieve it and yet keep it all to yourself at the same time. You'll never be the salt-kissed maiden in wind-torn dresses, but your friends don't have to know that in your dreams you are. Glamour is about inaccessibility to varying degrees. And nothing is as impossible and glamorous as the most wonderful fantasies! Only in mine, I'm an old woman living on a farm with a shotgun.

AC: You are able to make icons out of your characters. Has living in Texas, with all of the Catholic imagery around ... did that creep into your vocabulary, or has it always been there?

JH: It comes more from my own background growing up in a very small and conservative Episcopal church – Catholicism without the sumptuous imagery. I served as the altar girl for eight years. My dad was the warden of the church. But yes. I like the portrait as memorializing and reverent. Embroidery is the perfect medium to use when saying, "I spent a lot of caring and important time making this image in your honor."

AC: How do you choose your characters?

JH: Anyone with a heavy gaze. Anyone I find a little tragic. Roger Miller was a goofball, but there's something a little sad in all of his songs. 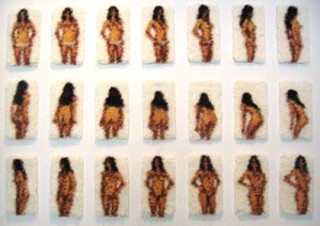 AC: You can make tough guys like Jack White look sweet and soft, like a real American hero.

JH: It's funny; that was an illustration I was asked to do for Venus. He was really difficult to capture. I was more concerned with getting Megan's eyes. I started that piece three times before I did the finished version. Their publicist called me to say, "They love it!" a long time ago, which was nice.

AC: Do you make up little stories about folks as you sew them?

JH: Oh lord, no. I'm dealing with my own crap! I really try to let my mind find ease and calm down when I'm stitching. ... [I can't wait until] all the prep work – choosing a subject, thinking about it, how I want to represent it, the sketching, the layout, the transfer – is all over, and I can stitch away.

AC: I love Princess Leia! Please tell me about meeting with Carrie Fisher. Dirty South by The Banana

JH: Oh, what fun! She's really warm, intense, and funny. She has this amazing and dark sense of humor. She's also really inquisitive and direct. Hell, she made me a sandwich! I hung out at her house for an evening, and she took me on a wild and crazy ride to Bel Air.

JH: The works she's commissioned me to do were all family portraits given as gifts. The pieces themselves are pretty straightforward. I wish I could say I did a big pillow of her as Princess Leia, but that'll be my piece to her as a thank-you.

Another artist in the show, Whitney Lee, gets permission from pornographers to use their images in her latch-hook rugs. At the Fig, she displays 360 Degree Spin, three rows of a nude woman; each tile is about 9 inches by 4 inches. It looks like motion stills from an animation of a tan brunette stripping. Camp Fig counselor Lee Brooks says, "From pixels to hooks of yarn – who would have thought a yarn-softened 8-dpi image could be so easily read and tonal while leaving all the private bits lost to resolution? Bits to bits."

That stitching is alive and well in Austin is further evidenced by the wall panels of The Banana, aka Mark Taylor. The Banana has learned how to add batting for extra poof. I really liked his piece with the black felt letters that said "DIRTY SOUTH." It also had the silhouette of a mop-haired Fifties chick machine-stitched onto it like a line drawing. The dramatic lettering struck me as silly good, like a form of quilt graffiti. One of his squares reminded me of old cot-mattress material. This piece seemed to me to be about the square and the choice of cloth more so than the face sewn into it. The consistently amazing Chia Guillory has a wild outfit of a jungle bunny bodhisattva that is really rainbow. (That's her in the photo on the wall if you go see the show.) Also in the exhibit are Jesse Kelly-Landes, Tina Lockwood, and Karly Hand. The small works here work great together in the confines of Camp Fig.