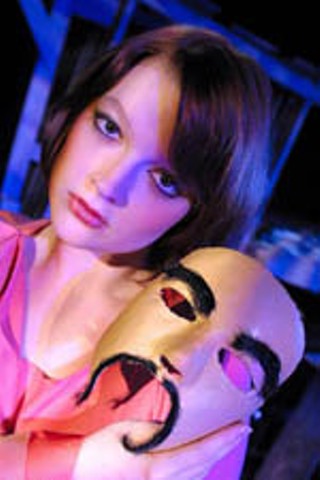 The Vortex, through July 31

Every summer the Vortex hosts its Summer Youth Theatre, in which a group of area teenagers and local theatre artists spends the summer creating a dramatic work from scratch. For the kids, it's a great opportunity to experience the life of a project in more professional surroundings than they might get in their various schools, working at the Vortex alongside mature actors, designers, and director; plus new artistic teammates means exposure to new ways of working, expanding a young artist's creative vocabulary. For the Vortex company members involved onstage and off, the projects offer mentoring opportunities and the chance to seize roles they might not find in the standard Vortex repertory. So while Bertolt Brecht's The Good Woman of Setzuan is a political fit for the Vortex, you wouldn't expect to see it in the company's mainstage season. For the Summer Youth Theatre, however, it's perfect, fitting well among previous summer efforts such as Kirk Smith's take on Dickens' A Tale of Two Cities, Aristophanes' The Frogs, and Rostand's Cyrano de Bergerac.

As with those other summer titles, Brecht's play blends performance styles of all sorts. There are songs and dances, dream scenes and out-of-the-moment monologues, and lots and lots of characters. It's a feast for a company like this, and the artists young and old make the most of it. The tale is of a good-hearted Chinese woman, Shen Te, blessed – if you can call it that – by the gods with sudden middle-class capital. She chooses to run a tobacco shop while trying to take care of her neighbors, relatives, and the social outcasts of her impoverished Setzuan city. In spite of their deadbeat and opportunistic tendencies to leech everything she has with little regard for their benefactress, Shen Te struggles on. Throughout, The Good Woman offers up a vague, ongoing political argument that waffles around a person's capacity to be both good and entrepreneurially successful. It's a hodgepodge of a play, full of contradiction and ambiguity, not one of the playwright's tightest stories or political statements, and its inherent shortcomings make it drag as each act lumbers along. But there is much energy and commitment among the cast, echoed in the intriguing incidental music and the colorful costumes by Pam Fletcher Friday. If the play drags some, the actors don't, and that goes a long way toward keeping the evening engaging.

Among the energetic cast, Kathleen Fletcher's water carrier, Wong, stands out. Fletcher is bright-eyed, focused, and possesses a strong voice as the play's narrator. Michelle Flanagan's rueful Mrs. Shin grows in stature and wisdom as the play goes on. And Zach Pettichord – a veteran of the Summer Youth Theatre – is aptly self-absorbed and self-pitying as Shen Te's surly love interest. Among the mature cast members, Mick D'arcy is ever dapper and disciplined as local rich man Shu Fu. Traci Laird is an approachable and grounded Mrs. Yang. And Betsy McCann, who has a fine singing voice, finds humor in the understated, terribly serious Second God. Melissa Vogt plays central character Shen Te, as well as her alter ego, the fictitious uncle, Shui Ta. Vogt acts amiable, confused, hurt, cunning, vengeful, and overwhelmed by turns, as the actress leads the ensemble with a solid performance, even as the script starts to wobble. Director Matt Patterson probably could have tightened things up a little, at least so far as trying to find a real throughline for his heroine – the hodgepodge nature of the script affects the rhythm of this production. But he's steered good performances from his mixed-experience cast, which knows what its tasks are and executes them good-naturedly throughout.