Being a Winedaler Without the Class

Two theatre professionals explain how Shakespeare at Winedale changed their lives, even though they were never part of the program 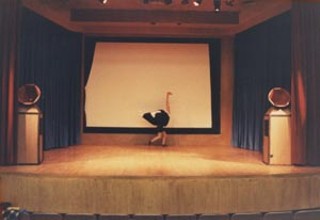 Winedale changed my life and I never even went!

In the late Eighties, I worked at the Waldenbooks tucked back in the now demolished Hancock Shopping Center courtyard with a gal named Anne Nabors. She had a disarming beauty rivaled only by her supreme intelligence, biting sense of humor, and, I later discovered, her brilliant talent as an actress. I saw her steal many productions: A Flea in Her Ear and The Seagull at Capitol City Playhouse and Les Liaisons Dangereuses at Zach. She was never less than thrilling.

Anne told me about a hip, talented guy named Clayton Stromberger who was looking to cast some female roles for a Václav Havel play and I should audition. I had done lots of theatre in high school but was a pretty lousy actress, so I blew it off. But they were persistent. I'm glad they were, because that moment would be key in completely changing the direction of my life.

Clayton ended up coming to my neighbor's home where I was babysitting. While the baby napped, he read with me for several roles. I knew I was terrible, and I could see it in Clayton's calm blue-eyed face, but he was sweet and kept at it, giving me direction and encouragement.

The Weetzah Players, Clayton's quirky theatre group, brought together some amazing people – Barry Miller, Monica Regan, Stan Kern, Robert Pierson – and I remain friends with them to this day. They all talked about this thing called Winedale, and I must admit I felt like I was on the outside of some religious experience. They all had in common a sharp wit and a delirious optimism for making something truly great out of nothing.

I helped pull some costumes together from my closet and thrift store finds. On the next production, an evening of short plays called The Coward-Shaw-Cocteau Show, I did more of the costuming. At a time when I was living on Top Ramen and pecans out of neighbors' yards, I was well versed at how to make nothing into something. I made a life-sized ostrich costume and a lion head out of papier mâché and various "trash" items. Joe Stevens, who was directing shows for Zach's Project Interact theatre company, saw them and asked me to work on animal costumes for it. That's how I got started as a costume designer.

I met Shawn Sides, who was touring with Interact, and later met Sarah Richardson, Madge Darlington, and Kathy Blackbird, who became the Rude Mechs, along with the Roberts Pierson and Newell. They did a Two Gentleman of Verona that blew me away. I could see in it even more clearly what Winedale did for these actors. There is an inventiveness in the Winedale approach to Shakespeare's work that brings it into our time. The comic timing is brilliant and the physical comedic energy so tight and economical. I heard wonderful stories of Winedale and how you had to make your own costumes. In Gentlemen (and the later Rudes productions), I admired how Sarah and these women were able to distill the costuming needs down to a single item that would make the simplest suggestion of a courtesan or clergyman.

Winedale people are ballsy and gleefully silly. They are freakishly talented, smart, and funny. They continue to inspire me nearly 20 years later to do my best work. They showed me how to think out of the box – and if you don't have a box to think out of, how to make the box out of nothing but bits of twine, spit, and pecan shells. To make something great out of nothing. They helped instill in me a fearless sense of believing I could do anything even if I'd never done it before. They helped me find my never-went-to-college ass out of a miserable existence in mall retail to a career that feels more like play than work – and I'm ever grateful. – Leslie Bonnell

The Rudes' Too Much Light Makes the Baby Go Blind

I started going to Winedale as an audience member, oh, ever since I can remember. It was a big family outing every year – my mom would pack a picnic dinner, and we would drive out to Winedale to catch as many performances as we could. The first play I remember seeing was the Scottish Play with James Loehlin and Steve Price in it. The tradition continued all the way through my college years. As I got older, my mother would ask me to prepare a "lecture" for the family about each play before we would see it. I would study my Arden and Riverside editions, and we'd sit under the trees by the barn eating my mother's signature Winedale dish – a shrimp pasta salad and steamed asparagus salad – as I played the part of resident family Shakespeare scholar.

It was only when I was almost done with college that I actually started to meet some Winedalers through Don Brode, with whom I'd gone to high school. One summer when Don was there I helped make some capes. Every now and then I still see one of my capes crop up in a Winedale production, and it makes me happy. Through Don I met John White, who asked me to be part of a Winedale offshoot called the Barefoot Players. The first play I did with TBP was The Tempest, in which I got to play both Ariel and Miranda and to meet a whole pack of Winedalers. A few years later a splinter group of TBP formed the Boxtree Players and produced The Two Gentlemen of Verona. And in many ways, Rude Mechs was another splinter group of Boxtree. Ahhh, the genealogy of Austin theatre. So it was through these connections that fate brought the original Rude Mechs together: myself, Kirk Lynn, Lana Lesley, Madge Darlington, Kathy Blackbird, Shawn Sides, Kirsten Kern. I began to think that I really couldn't contribute properly to our company unless I too spent a summer sweating in the barn. But my colleagues convinced me that probably wasn't the case – I'd already absorbed the Winedale spirit in just about any way that mattered. I suspect they're right, but even now I regret that I never went through that experience.

I was always drawn to Winedale because of the fierce, raw spirit in every performance. Even when the acting wasn't at a professional level (whatever the hell that means), each play was infused with this deep, passionate intention and attention by all the people on stage. It was palpable. The students cared so much about what they were doing and poured everything into it. The commitment was infectious. Subconsciously, it set a standard for me that has had a profound effect on my work as a professional theatre artist. I've always sought that same level of personal investment and care for what was happening onstage. I was also instinctively drawn to the Winedale methodology: Everyone builds the set, makes the costumes, serves the food; everyone is responsible for every moment onstage. Despite Doc's leadership, the Winedale experience really is a collective one. It led me to believe early on that a collective approach to art-making is the way to go. The other aspect of Winedale that remains so compelling to me is the huge sense of community. Every arts group talks about "community" these days, but few actually embody that idea in the deep way that Winedale does. The bonds between Winedalers across the years are intense. My family's connection to the annual pilgrimage to see the plays and eat food together and share in the long tradition was equally intense, and shared by other families, I'm sure. – Sarah Richardson