A case study of one post-Winedale company 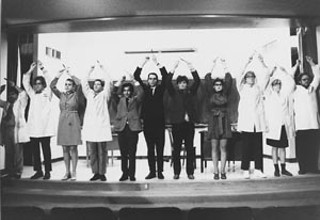 When I hear the Winedalers of today talk passionately about their new theatre troupes, I think of that bittersweet moment in "Hello Young Lovers" – which I know only from the Mel Tormé rendition, so it's with his undulating voice in my head – when the lonely protagonist, after cheering on the young lovers to follow their star and be brave and faithful and true, implores them not to feel sorry for him: "All of my memories are happy tonight. I had a love of my own, like yours ..."

I did indeed have a love of my own: a sweet little theatre company called the Weetzah Players. For 3½ years, I was a Weetzah – or "Wheet-ZAWW" as dear old John Bustin would drawl in his theatre reviews on AM radio. We appeared from nowhere one winter day in 1987, did seven productions of neglected masterpieces and oddball classics, mostly staged in beaten-up UT auditoriums, then vanished into the mists of time in 1990. I have the pictures, but sometimes it all seems like a dream. Sing it, Mel: "I know how it feels to have wings at your heels and fly down the street in a trance ..."

I don't think I'll ever have as much fun on a stage or work with more amazing people.

I called my old co-director Monica Regan, now a much-loved drama teacher at Georgetown High School, to ask what she remembers from our Weetzah salad days. "We weren't really known for doing the traditional realistic style of theatre," Monica recalled. "We weren't known at all, to be honest."

The Weetzahs delighted in a quirky anonymity. It was right there in our name: nonsensical, zesty, a bit of an eyebrow-raiser. "What's a 'Weetzah'?" we were often asked. When short on time we would say vaguely that the name came from an obscure Norse god. Some people thought of Dr. Seuss. One night an audience member excitedly informed us that in the Gypsy language, "vitza" meant "root." That was perfect! Serendipity! Or was it "tree"? I'm afraid I've forgotten. One wag, after seeing half of our repertoire, announced that "Weetzah" must mean "play with a desk," as some of our plays featured a desk. One desk. Often the same desk, as Monica reminded me.

I don't remember the desk too clearly, but I do recall an entire family with hair made of cotton-covered toilet paper rolls, a guy zapping people with a giant cardboard lightning bolt, an ostrich loping across a big bare stage, a chorus line of blank-faced people in lab coats dancing with forks and knives to Lawrence Welk's zippy "Calcutta," a sudden gust of wind blowing open the great stage loading doors of the Utopia Theater during the intense final scene of Measure for Measure.

The truth about our troupe's name is that one night Monica and I were poring over Trevor Nunn's brilliant 1979 Macbeth and distinctly heard Ian McKellan blurt out "Weetzah!" (Rent it yourself if you don't believe me! It's just after Duncan's body is discovered.) This promptly became a running gag every time we watched the video. When we were looking for a name that was unpretentious and invited curiosity, "Weetzah" fit the bill. "Players" was an homage to the ensemble spirit of Winedale. (Notice how many groups on these pages have "Players" in their title?)

Monica and I were pals long before either of us had gone to Winedale, but that experience certainly propelled us toward Weetzah-dom. How else would we have become obsessed with Shakespeare? What else would have led us to travel to England with young James Loehlin, where we saw 21 plays in 21 days? Winedalean performances influenced us as well. I met future Tony-winner John Rando at Winedale, where he was a riveting Hamlet, and from his directorial debut in 1984 with Brecht's feisty The Exception and the Rule I saw how to take a large space – in this case, the Dougherty Arts Center – and make it more intimate by placing chairs on the stage. We did that later in the cavernous Utopia. That was also the year I was briefly involved in the failed attempt by a large group of Winedalers to stage a directorless production of The Knight of the Burning Pestle in tiny Calhoun 100. (It collapsed in a big, teary-eyed gathering – ironically enough – right in front of Dr. Ayres' locked office in the basement of Calhoun Hall.) 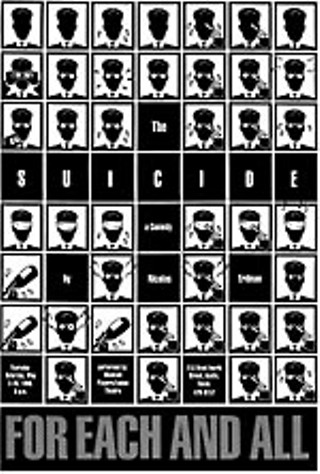 As Monica and I puzzled over how to launch our theatrical adventure, I thought of Calhoun 100 as a space for our first production. You had to be a student group to use it for free, so we formed a student group. But since we weren't students – hadn't been for years – John Stokes, a Winedale friend who was a grad student, became the first and only president of the Weetzah Players and one of its core performers.

We rounded up every loose Winedaler we could find who seemed to have the Weetzah spirit and dove headfirst into Richard Brinsley Sheridan's great farce The Critic. Everyone had a talent to contribute, from costumes to set painting, and serendipity brought us some wonderful inspirations, such as Monica's vinyl record of the "1812 Overture" that skipped at the peak moment of the cannon-blast finale, which we played during Mr. Puff's frantic efforts to prop up the great "Spanish Armada sequence" collapsing around him.

We had our day jobs; we were young; we loved every minute – except for perhaps the Friday night of our debut weekend, when no one came. Not a soul. We poked our noses out of the Calhoun curtains at 7:30pm to see rows of empty seats staring back at us. It was like something out of Spinal Tap. We waited 10 more minutes, then the cast happily went off to Trudy's to hoot and holler. Monica and I separately went home to have mild nervous breakdowns. It got better after that.

Monica and I played roles and took turns directing, encouraging the Winedale spirit of improvisation and collaboration. Wonderful people came our way including many folks who are still mainstays on the local scene: lovely Margaret Hoard, who cracked us all up in Sheridan's parody of the Ophelia mad scene; the amazing Leslie Bonnell, who cut loose as a designer on The Coward-Shaw-Cocteau Show; Barry Miller, now an Equity actor, who had the distinction of being in every Weetzah production; and Robert Pierson, who created his first wild-haired psuedo-scientist for our production of The Memorandum, Václav Havel's satire on an absurd new bureaucratic language called Ptydepe.

For that production, I put up cryptic posters on campus saying "Do you know Ptydepe yet?" and "Ptydepe will soon be required for all official communications," followed by a second series advertising the performance dates as "Ptydepe classes" put on by the Weetzah Players, with the play info in small print. No one came to learn Ptydepe, though I was told that some UT students had been inquiring uneasily about whether this new directive would affect their ability to graduate on time.

I think I did all this in the spirit of leaving crumbs. I wanted it to be a treat for people to find us.

I see now that my post-Winedale theatre experience, and my subsequent work as an elementary school teacher, was mostly about this – about discovering, stumbling upon, uncovering, to your delight, something precious and wonderful. It connected me to the times when I was a kid and would get lost in the woods near our house just so I could find my way home. I had stumbled upon Winedale as a young man headed for a journalism career, was lucky enough to get accepted to the program, and I drove out there not knowing what the barn would look like or how to play a singing gravedigger in Hamlet. I found out.

The final step, as Doc taught us, was always sharing your discoveries with others. As Weetzahs we discovered these great plays and found what we were capable of in bringing them to life; the audience discovered us, tucked away somewhere on campus. We all learned from one another, and many of us found our lives nudged in new directions.

"Not ends but beginnings," as Doc loves to say. Hear hear. 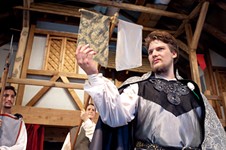