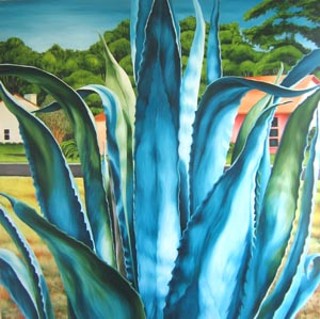 Summer ... 'tis the season for group shows, which is fine for me because I like group shows. It's like walking through an eclectic house, where each room is different: first a large realistic painting, then an abstract mixed-media piece, then a small print series. What a treat to see such diversity of medium and style in the same space. It's been said that group shows are really about the curator, because the exhibit is not focused on any particular artist's body of work. In that case, we should all thank 2040 Gallery owner Mo Scollan for having such good taste. A painter herself, Scollan has put together an exquisite show. Not leaving Texas for the summer? Well, mountains literally rise off the panels of Michael Abelman's highly textured map paintings. They're made from matted and dried layers of paint that crackle like real mud. Glossy rivers and lakes wind between geological features and colorful dots representing cities and painted-on roads. Evidence of civilization is insignificant compared to the natural topography.

Stella Alesi has a new set of mandalas, with a color scheme that looks bleached by the sun. Red and blue radiant circles seem to fade into a light pink ground, whispering, "Go toward the light." On a sillier note, Alesi includes four whimsical marker drawings that suggest happy amoebas. Another vaguely amoebalike piece is Andrew Long's Ariel Love, in which pairs of ochre egg shapes hover over a cloudy, yellow-green field with rich brown patches. Scratched in are other forms reminiscent of circling electrons. It's small and pretty. The other Andrew in the show, St. Martin, displays some large-format abstract works featuring strong earth tones that are really nicely balanced and give off a relaxed feeling. The compositions are slightly groovy and have nicely simplified shapes. They are not overwrought or chaotic; rather, they combine broad forms with light gestural marks.

Enough of the abstract work. Let's move on to that classic target of Southern Artists, the agave. Shark-toothed appendages make a bold silhouette, and its spikes add an element of danger. Light is reflected in a white sheen covering a bluish-green surface. Valerie Fowler has painted some truly grand agaves. In her new work Hiding Place Agave, Fowler uses more dramatic perspectives and has more depth of field than in previous panels. The mostly blue plant emerges in the foreground out of the bottom of the 3-foot-by-3-foot smooth pane, its rippling form filling the majority of the square with crisp vertical rhythms. Many artists would leave it right there – a beautiful plant drifting in an atmosphere outside place and time – but Fowler has a penchant for detail and utilizes the full potential of the surface. Behind the plant is a refined street scene. Yellow strands of grass fade into a realistic brown lawn, then a stripe of gray pavement, then a lush green lawn and a couple of homes. Various trees lead us up to a blue sky. I found myself peering between the leaves to see all these elements in the background. One of the homes is a peach color, a hue often included in Southwestern landscapes, usually in light reflected off rocks or in a sunset. But here it's on what appears to be a typical house in a South Austin neighborhood, the peach a perfect contrast to the blues of the agaves. The color theorist in me loves to see the optical trick of making bright, light warm colors recede into the background. Fowler has two large paintings here, both elegant and cheerful local landscapes.

"Summer Swim" also includes work by Connie Arismendi, Gay Fay, Gabel Karsten, Tony Romano, and Sarah Rondeau, plus Christine Luksza's hilarious series titled Immersions, with underwater photographs of groups of pregnant women in matching swimsuits. About the theme of the show, Mo Scollan says, "I want people to walk in out of the heat and feel like it's refreshing and bright in here. It appears light even if the content of the work is more serious."