Physical Plant Theater's first Garden Party raised more than $8,000, Ann Hume Wilson has been appointed associate director of the Blanton Museum of Art, Blue Lapis Light is exhibiting – and auctioning off – bras and breastplates for angels, and the city unveils a new mural at the Pan Am / A.B. Cantu Recreation Center 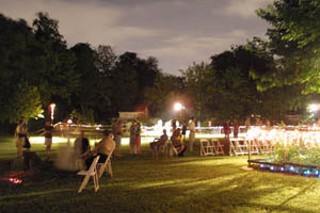 • Physical Plant Theater's first Garden Party was not only a singularly beautiful and charming affair, it raised more than double the funds that the 10-year-old company expected: over $8,000, which will go toward its first official season. Next for the company: Wallace Shawn's one-man play The Fever, which, in typically offbeat Physical Plant style, will be performed by Matt Hislope over a low-watt FM radio transmitter on the top level of the Whole Foods parking garage, 601 N. Lamar. It launches a new drive-in radio drama series dubbed Dashboard. The Fever opens June 18. For more information, visit www.physicalplant.org.

• Bras and breastplates for angels? That's what Blue Lapis Light is exhibiting – and auctioning off – at The Green Studio, 1401 E. Sixth, on Thursday, June 3, 7pm. These celestial foundation garments were created by Austin visual and performing artists (Laura Cannon, Brooks Coleman, Janet Seibert, and Reji Thomas, to name a few) to benefit Sally Jacques' where nothing falls II, the sequel to the absorbing site-specific dance Jacques premiered last summer. A silent auction for each piece will be held at the exhibit. Where nothing falls II runs June 16-27 at the Domain, 11400 Burnet. For more information, call 731-3794.

• A new mural in the city's fine collection will be unveiled Saturday, June 5, 10am, as part of the reopening of the Pan Am/A.B. Cantu Recreation Center, 2100 E. Third. The 700-square-foot work by Austin artist Martin Garcia is located in the main lobby of the center and depicts the history and activities of the neighborhood, from evening dances in the park to A.B. Cantu himself coaching youth in boxing. Garcia based the mural's images on photographs he took of the neighborhood and historic photographs from Mr. Cantu and members of the community. The mural project was commissioned through the City of Austin Cultural Arts Division's Art in Public Places program and funded as part of the capital improvement project from the 1998 Bond Program.

• The 12th annual Austin Critics Table Awards will be handed out this Monday, June 7, 7pm, at the Cap City Comedy Club, 8120 Research. Awards in 50 categories, more than a dozen special citations, the induction of eight new members of the Austin Arts Hall of Fame, light banter, adult beverages, and local critics at their silliest. Admission is free.

• Ann Hume Wilson has just been appointed associate director of the Jack S. Blanton Museum of Art. She comes to Austin from the Walters Art Museum in Baltimore, where she has spent the past seven years as director of marketing and communications. Prior to that, she was manager of public relations and marketing for the High Museum of Art in Atlanta. In her new position at UT, Wilson will oversee visitor services, marketing, public relations, and publications.