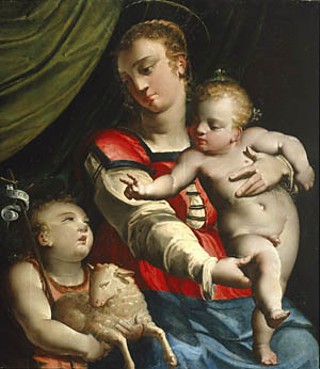 A 450-year-old work of art from Italy has just taken up residence at its new home in Austin. Virgin and Child With the Young St. John the Baptist, a 36-inch-by-32-inch oil painting by Luca Cambiaso, arrived from Europe on Monday, April 5, and was hung in the second-floor galleries of the Blanton Museum of Art on Wednesday. The Blanton was able to purchase this 16th-century work, estimated to be worth at least $500,000, through a special donation by the Effie and Wofford Cain Foundation. In other words, it's a major acquisition – and for the museum that already possesses 240 masterworks of Renaissance and baroque art in the Suida-Manning Collection, that's saying something.

On hand to oversee the setting of this latest gem in the museum's collection crown were Blanton Director Jessie Otto Hite and Jonathan Bober, curator of prints, drawings, and European paintings, who enlightened those present for the unveiling with an effusive description of the work's strengths and historical significance. Noting that Cambiaso was only 22 or 23 years old at the time he painted this particular Virgin and Child – an image he explored many times on canvas – Bober pointed out the elements that revealed an ambitious young artist pushing himself and the creative envelope of his day.

Indeed, it has the look of a young man's work, especially compared to the painting it now hangs beside, another work by the Genoese artist but painted 20 years later. A softening of form and light and an overpowering sense of intimacy in the later work contrast sharply with the bold edges, brightness, and compositional vigor in the Virgin and Child. Looking at the pair together offers even the casual viewer fascinating insights into the development of an artist over time, how style, technique, and subject evolve as the human being matures. It also helps explain why museums acquire multiple works by the same artist; they give us not only enriching artistic experiences but opportunities to study and understand the creative process and the creators themselves.

"This is the kind of acquisition a serious museum must make," Bober insists, and standing in the gallery with this one, it's hard to disagree. The new acquisition brings the number of Cambiasos owned by the Blanton to seven.

What Can a Century Tell Us?
Looking at two art exhibitions that both survey 100 years of imagery, the more things change ...