A Timeline for Controversy and Reform

May 2001: Despite an admission that the guideline in question was not intended to apply to Sharir+Bustamante, the Arts Commission refuses to reopen the process and allow the company's application.

June 2001: Charges over irregularities in the peer review panels are leveled by dozens of applicants in a five-hour public hearing with the Arts Commission.

August 2001: Mayor Pro Tem Jackie Goodman circulates to the Arts Commission and the council a draft proposal for revamping the cultural contracts process, with a comprehensive audit of the program and the hiring of arts funding consultants to propose improvements.

August 2001: In a 3-2 vote, the Arts Commission reverses itself and allows Sharir+Bustamante to apply for funding.

September 2001: The downturn in the economy and response to 9/11 cause a drastic decline in revenue from the hotel/motel bed tax and in funding for cultural contracts.

June 2002: More controversy erupts over peer review panels as they drastically cut funding for some longtime applicants, and the commission upholds their recommendations.

August 2002: Reform gets under way as the city hires Lucille Dabney and associates Marian McCollom and Eduardo Diaz as consultants to study Austin's arts funding program.

September 2002: City Council tosses out all Arts Commission funding recommendations for fiscal year 2003 and institutes its own system of across-the-board cuts, based on the previous year's funding levels less 31%.

September 2002: The city auditor delivers a report on the city's cultural funding process, calling it "an increasingly unworkable system for allocating City funds," citing inconsistencies in allocation and evaluation procedures, circumvention of the appeals process, and ineffective communication.

December 2002: Dabney & Associates presents its report to the City Council, calling for major reorganization of the city's cultural arts programs, including the creation of an independent "private, nonprofit arts agency."

October 2003: After months of input, a draft of new guidelines for the Cultural Contracts Program is made available for public comment. 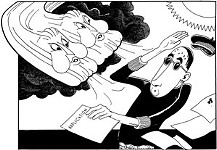 Who Will Be the Arts Tsar?
Finalists for the job of Austin's cultural arts program manager address the public