The trials of St. Anthony get a modern hearing in UT Opera Theatre's American premiere 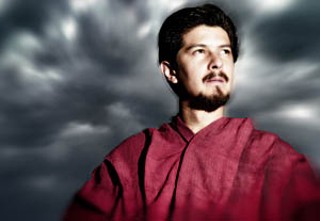 The third-century story of St. Anthony, the hermit who, according to tradition, experienced every temptation the devil could devise, has provided sometimes troubling inspiration for many artists through the centuries. Matthias Grünewald's 500-year-old depiction shows up in Paul Hindemith's opera Mathis der Maler and in starkly autobiographical paintings by Jasper Johns. Jan Brueghel's painting provided inspiration for Gustave Flaubert's book, on which Mexican composer Luis Jaime Cortez based his 1998 one-act opera, La Tentación de San Antonio, which receives its U.S. premiere on Feb. 27 at the University of Texas.

"Saint Anthony, in the vision of Flaubert, is a kind of pagan man who is victim of a modern issue: He doesn't know who he is. He wants to be another person -- this is his real, profound temptation," says Cortez. "It is important to say this: It is not a religious work. Flaubert's book is absolutely pagan and irreverent."

In the Austin production, UT Opera Theatre director Robert DeSimone and costumer Michael Hite bring together images both saintly and salacious. Hite juxtaposes brightly colored Mexican Catholic iconography with an alluring presentation of the Queen of Sheba, one of many historical figures (including Helen of Troy and St. Hilarion) who tempt the hermit monk. She will wear a revealing breastplate that might raise eyebrows at a Super Bowl. "I wanted something completely sensual and completely outlandish," Hite says. Some, DeSimone expects, will be scandalized.

DeSimone saw Cortez's opera as an opportunity to contribute a Spanish-language opera to the university's multidisciplinary ArtesAméricas program. "I preferred to write the opera in Spanish because I like my language and I wanted to bring Flaubert to the sounds of it," Cortez says.

Cortez, who also wrote the libretto, says the music bears traces of the circus atmosphere of Fellini movies and the expressionism of Alban Berg. "The construction of a Satan-like personage was maybe the most difficult thing. I decided to make a complex Satan, formed by three singers: a baritone, a tenor, and a countertenor."

Although DeSimone and Cortez are longtime friends, Cortez was not involved in the staging of the UT production. "It will be a complete surprise for me," Cortez says. It also offers a surprise for bass-baritone Salvador Ginori, who performs the title role. To portray Anthony's unmoored mental and spiritual state, DeSimone will have the saint flying, à la Peter Pan, although with not-so-happy thoughts. "We hadn't told Salvador," DeSimone says. "He is a bass-baritone, and he wondered if he would become a coloratura soprano." 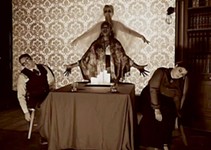 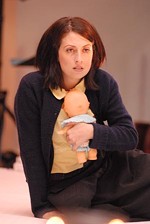