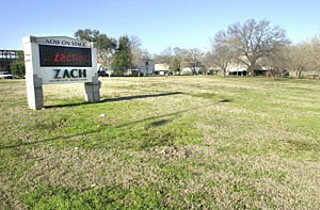 When the Zachary Scott Theatre Center built its second stage and administrative wing in the late Eighties, using funds approved by Austin voters in the bond election of 1985, it didn't spend all the money that was available. Zach held onto roughly $2 million of the $3.5 million for the eventual construction of a third space, a roughly 500-seat facility at Riverside and South Lamar. It took until the year 2000 for the theatre to move forward on that project, but then it announced that award-winning New York architect Steven Holl would design its third theatre. Sadly, within months of the announcement, the economy began to turn, and Zach put the project on hold without developing designs or costs. At present, the third theatre remains in Zach's long-range plans but will probably be more modest than the one imagined during the boom. Holl's continued participation in the project is not known.