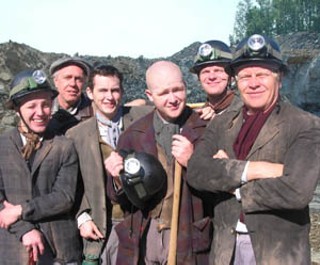 The Off Center, through Feb. 7

Most of the reasons to see The Road to Wigan Pier are suggested in its subtitle, A (Socialist) Tea-Time Travelogue & Historical Musical Revue. It's an educational experience, charting the tumultuous relationship between England's government and its coal-mining industry throughout the 19th and 20th centuries. It's a musical experience, with original songs played live by theatre artists of various ilk, with almost uniform excellence. It's a revue, with skits, jokes, gags, and a winkingly overbearing master of ceremonies. And, yes, it's replete with "the ubiquitous cuppa tea," if that's your thing. But the reason I'm telling my friends to go see this show is simple. Despite its focus on a bleak slice of history with a less than happy ending, regardless of its depiction of inhumane working and living conditions, and in spite of the suffering of its lovable characters, this play, penned and directed by the Chronicle's own Robi Polgar, is a ridiculous amount of fun.

Wigan Pier is off the charts in offering a wraparound sensory experience from the moment you step into the Off Center. But its world is not so much created as resurrected; Polgar has reinvented life as it looked, sounded, even tasted, in a 1920s workingman's pub, the social hub of any South England mining town. As a Wigan Pier audience member, you get your 7th Street Working Men's Club membership card and raffle ticket at the door and are offered a cup o' tea and a biscuit. But it's once you've settled in that you begin to notice the stunning detail that's gone into creating this experience. After buying a cuppa and a mint, my eyes wandered to a bunch of daisies on my table, held by a tin can bearing the cheery retro logo of Uncle Joe's Mint Balls. Picking up the can for closer inspection, I noticed that it was a product made in Wigan, UK -- the same product being sold at the concession cart by a "Wigan" wench. Amused, I looked up at the theatre's black brick wall, only to see a tattered period advertisement for Uncle Joe's Mint Balls in an unassuming corner. Subtle, real-life touches are everywhere in this piece; along with excellent costumes, terrific acting, an understated set, and the traditional-style music of the Late Joys, they're instrumental to the authentic feel of the piece.

Had Polgar allowed the miners' story to venture into the maudlin or pitiful, this strong sense of realism could have sunk in an excess of gravity. Instead, he has written and presented it with such bawdy, buoyant wit that it comes off as a celebration of the miners' own black humor, strength, and tenacity, rather than a plodding tale of woe. Wigan Pier covers a vast amount of ground, educating its audience in myriad aspects of the miners' lives: their work, their religious practices, their leisure pursuits, their passions, and their spending habits. But it never depicts them as powerless; they're clearly powerful people in paralyzed, and often heartbreaking, positions.

The show is not perfect. A few technical glitches marred opening night, and I left the play unclear whether I should be glad the "bad old days" of mining are over or grieve the loss of the trade. But the range of elements expertly woven into this piece is remarkable -- live music, text by George Orwell, film, dance numbers, still photos -- and they are put together with sufficient effort and ingenuity to turn all the raw coal into a diamond of the first water.