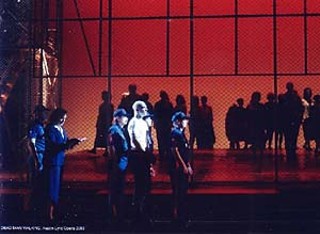 1) where nothing falls (Sally Jacques Productions) In a year shadowed by war, loss, and grief, Sally Jacques took us to heaven. The choreographer set this site-specific work in a cavernous warehouse space, close and sweltering in the summer heat, but when her fearless corps of roller-skating dancers glided out of a fog bank at the far end of the space, we were lifted up into the clouds. There we witnessed celestial contemplations of bereavement and healing, accompanied by the deeply felt vocals of Tina Marsh, proving herself Austin's Piaf. Heavenly.

2) Dead Man Walking (Austin Lyric Opera) A bold risk on ALO's part -- mounting a new American opera about a murderer on death row -- paid off in a production that took audiences on a moving journey of discovery -- of self, of truth, of love in a barren heart -- where we felt each step on its long and stony way.

3) A Midsummer Night's Dream/Taming of the Shrew (Ballet Austin) BA Artistic Director Stephen Mills cemented his rep as one of our finest interpreters of Shakespeare with these twin adaptations of comedies by the Bard. Packing both with a rollicking physicality, he infused ballet with hilarity and slapstick with grace, but he also revealed a shrewd grasp of Shakespeare's characters, which his cast embodied with elegance. Margot Brown's lovelorn Helena was again a dream all her own in the Midsummer revival, while Allisyn Paino grounded Shrew with her flashing eyes, stormy stomp, and unexpectedly tender heart.

4) Alegría (Cirque du Soleil) It took decades for Cirque du Soleil to set up its snowy tents in our town, but this spectacular production proved well worth the wait. The big-top experience was transformed into something "rich and strange" by astonishing acrobatics, luxuriant costumes, and accents of mystery and wonder.

5) Who's Afraid of Virginia Woolf? (Zachary Scott Theatre Center) Forty years after Edward Albee unleashed his clashing spouses, George and Martha, on the world, director Ann Ciccolella made their marital bloodbaths wholly fresh and totally terrifying, with a razor-sharp portrayal of George by Phillip Goodwin and a fearsome embodiment of Martha by Fran Stewart Dorn.

6) "I'm Not Lying" (State Theater Company) This theatrical self-portrait from Jaston Williams was a revelation, with the actor/writer laying his life as open as the West Texas landscape in which he grew up, disclosing previously unglimpsed gifts for lush detail and lyricism in his writing. Riotously funny, deeply personal, quite moving.

7) Mrs. Warren's Profession (State Theater Company) Shaw with all the blood and bone to make his political oratory flow from the mouths of living, breathing people. Smartly staged by Scott Kanoff, this exploration of women in society felt urgent and real, the dialogue made scintillating by a stellar cast, led by Fran Dorn.

8) Nita and Zita (Artspot Productions) Who knew ghosts could be so charming ... or dance so well? Katie Pearl and Kathy Randels made fetching spirits in this giddy cabaret, co-created with Lisa D'Amour, about gypsy sisters recounting their lives in vaudeville and New Orleans. Would they would haunt us again.

9) Twisted Olivia (Zachary Scott Theatre Center) Who but Everett Quinton (and fellow Ridiculous Theatre Company veteran Eureka) would think to have Dickens' Oliver Twist performed solo by a drag queen in a thrift shop? No one, and no one but these two could pull it off with such comedic mastery, storytelling ingenuity, genuine urgency, and generosity.

10) How Late It Was How Late/Requiem for Tesla (Rude Mechanicals) Something old and something new that proved the Rudes are still holding true. Their revival of Kirk Lynn's Tesla showed the collective not content to repeat itself, with new elements -- Robert Pierson's portrayal of the titular inventor and Michael Raiford's iron cage studded with 200 bulbs -- shedding new light on the work. Lynn's adaptation of James Kelman's How Late found the Rudes ingeniously manipulating sound and image -- courtesy of a live video feed and giant screens -- to communicate the disorientation and discomfort of sudden blindness. Depicting a lack of vision shows the creative vision that drives this company, and it continues to thrill.

Crazy for You (Zilker Theatre Productions)